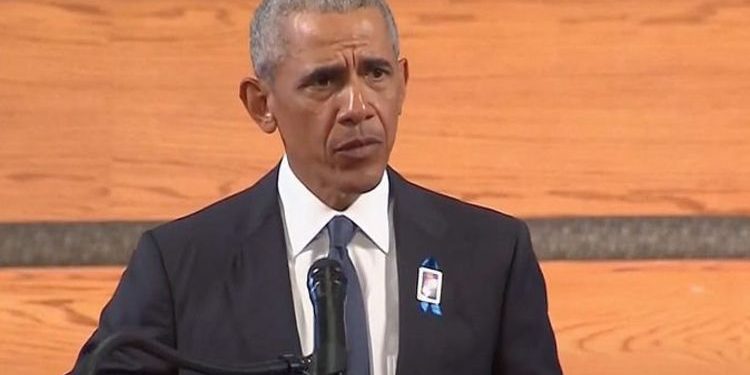 BARACK OBAMA unleashed a scathing attack on Donald Trump during a recorded message to the Democratic Convention – but the former US President’s words divided opinion.

Barack Obama hit out at Donald Trump, stating that the US President has shown no interest in putting in the work the position requires. The former US President added that his successor has helped no one but himself and his friends during his three and a half years as President. But his words were met with criticism from US voters on Twitter, with one branding the attack a “jealous spat”.

Mr Obama said: “I have sat in the Oval Office with both of the men who are running for President.

“I never expected that my successor would embrace my vision or continue my policies.

“I did hope, for the sake of our country, that Donald Trump might show some interest in taking the job seriously.

“That he might come to feel the weight of the office and discover some reverence for the democracy that had been placed in his care.

“No interest in treating the presidency as anything but one more reality show that he can use to get the attention he craves.

“Donald Trump has not grown into the job because he can’t and the consequences of that failure are severe.

“170,000 Americans dead, millions of jobs gone while those at the top take in more than ever.

“Our worse impulses unleashed, our proud reputation around the world badly diminished and our democratic institutions threatened like never before.”

Another wrote: “You are a moron.”

Someone else said: “The one who could speak eloquently but did not contribute much to the American people and society? One who showed he’s better with words and actions to make America a better place? We don’t need an eloquent president. We need one who take actions.”

And another voter raged: “Wow. Even if this was true, a jealousy spat doesn’t negate the law. The facts are there in black and white, regardless of anyone’s feelings. The truth ALWAYS comes out. Obama is a disgrace.”

However some viewers took to Twitter to praise the former President’s speech.

One Twitter user said: “This speech by Obama is going to keep Trump awake all night.”

Another tweeted: “@BarackObama DNC speech is an unprecedented takedown of a President by predecessor, even more remarkable because until the John Lewis funeral, Obama avoided responding to @realDonaldTrump attacks on him and his legacy.

“No more. He believes the future of democracy is at stake.”

A third wrote: “This Obama speech is good in the way most of his speeches were good. Artful, smart, persuasive, well-constructed.

“But it’s great in the way it feels deeply personal and emotional, which we didn’t always see from him.”