All eyes on climate summit in Egypt 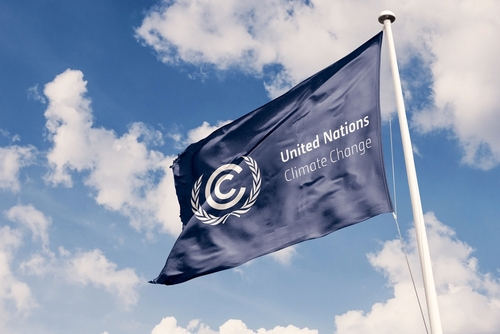 October 22, 2021, Brazil. In this photo illustration the United Nations Framework Convention on Climate Change (UNFCCC) soon appears on a flag

Belgium, (Brussels Morning Newspaper) The 27th UN Climate Change Conference (COP27) will take centre stage this week, and this year all eyes will be on Sharm El-Sheikh, Egypt.

This summer’s floods, heat waves and draughts have exemplified the acute urgency of the climate issue.

For many, such events suggests the West must move away from fossil fuels and massively invest in renewable energies.

On the occasion of the 27th Conference of the Parties (COP27) of the UNFCCC in Sharm-El Sheik, Egypt, BusinessEurope has published a position paper its key expectations for the summit.

The European business community is calling on all parties to agree on ambition levels similarly high to that of the EU and to make substantial progress on issues such as Art. 6 and the Global Stocktake.

Speaking on the eve of the event, BusinessEurope President Fredrik Persson said: “As the effects of climate change are becoming more and more visible to all of us, bold action is needed from the negotiators gathered in Egypt.

“The EU has proven its commitment to climate action with the Fit-for-55 package of measures – the negotiations on which must be finalised while taking the dire energy crisis on the continent into account.

“All G20 countries must now agree to similarly ambitious 2030 targets and, more importantly, also implement and enforce the legislation needed to achieve them. Only concerted, multilateral action will help overcome the very real risk of carbon leakage. Beyond the commitment to targets, negotiators must also push forward on crucial technical issues such as the new mechanism for carbon trading under Article 6.4 and the ongoing Global Stocktake. Developed countries, including the EU, will have to be ready to engage seriously on climate finance, in order to break the deadlock in many discussions. Sharm-El Sheik must show that the world is still committed to keeping the 1.5 degree target alive.”

The Greens in the EU Parliament, meantime, say the EU “needs to step up by increasing its climate targets and setting up concrete binding measures.

“The polluters of the climate must live up to their responsibility and finally live up to their promise of compensation for loss and damage and pay more than 100 billion dollars to countries and regions particularly affected by climate change by the end of 2022.”

Elsewhere, the Commission will call on all parties to take urgent action to bring down greenhouse gas emissions and respect the commitments they made under the Paris Agreement, as well as in the Glasgow Climate Pact adopted last year at COP26.

On 7-8 November, President Ursula von der Leyen will represent the Commission at the summit while Executive Vice-President Frans Timmermans will lead the EU negotiating team. Commissioners for Energy, Kadri Simson, for Environment, Maritime Affairs and Fisheries, Virginijus Sinkevičius, and for Agriculture, Janusz Wojciechowski will also participate at events at COP27.

The Commission’s negotiating team will push for the implementation of existing commitments to move from ambitious words to concrete actions, including through the adoption of a Mitigation Work Programme to urgently scale up mitigation ambition and implementation in this critical decade.

On adaptation to climate change, the EU says it is committed to achieve clear progress towards the Global Goal on Adaptation (GGA).