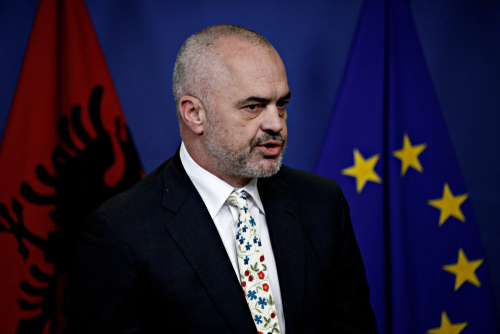 With some 30% of the votes tallied, early results released on Monday showed PS had secured 49.4% of the total vote, while the largest opposition party received some 38.8%. The final results are expected sometime during Tuesday.

Analysts’ projections are giving Rama’s party up to 75 seats in the 140-seat parliament, which would secure a stable majority for his government and make Rama enter history as the first Albanian prime minister to serve for three terms since the country’s first democratic elections in 1991.

Rama’s chief opponent, PD leader Lulzim Basha, had served as the Prime Minister before first losing to Rama, eight years ago. The democrats issued a range of popular pledges, from lowering taxes and raising salaries, to providing more financial support to social programmes.

The elections were seen as a poll on Rama’s rule, with the majority of analysts expecting the PS to emerge as the strongest party individually, with the off-chance of several opposition parties being able to pool their votes and out-perform PS.

Both Rama and Basha promised to continue reforms with the ultimate goal of joining the EU, after the bloc agreed to open membership talks last year. Rama’s government implemented a number of electoral reforms ahead of the elections to satisfy the EU’s criteria on transparency for campaign spending.

The election campaign featured deep rivalry between the political parties, fiery exchanges, and even a shooting incident on Wednesday of last week. This was linked to a party activist, ending in the death of one person and four others injured, and was condemned by the US Embassy.