2,800 protesters in front of the Russian Representation 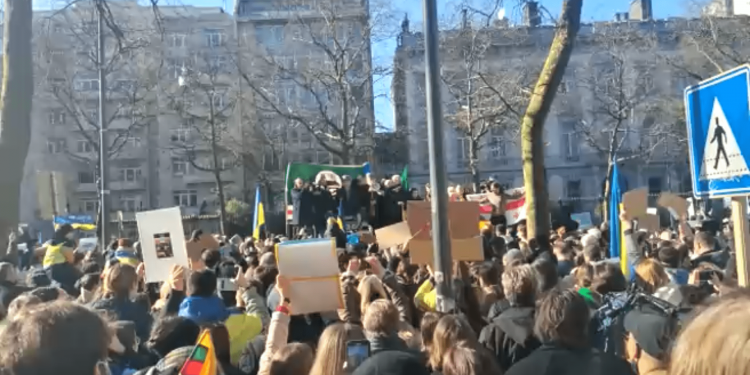 BRUSSELS (Brussels Morning) – In addition to the peace campaign at the Europe Crossroads, a support campaign is also being organised by the Ukrainian community. They are calling for strict sanctions against Putin to stop the Russian invasion.

The action is organised by Promote Ukraine and Ukrainian scouts in Belgium. The manifestation will take place at the Permanent Representation of Russia to the European Union in the Regentlaan.

On Facebook, organisers are asking to take to the streets to show solidarity with the Ukrainian people, protest against the Russian war, take the most drastic economic and political sanctions against Russia, protect Ukraine from Russian airstrikes and incite the leaders to send military equipment to the Ukrainian army.

The demonstrators chant, among other things, ‘Putin, go home’ and ‘Stop Putin, stop the war’. The placards carried slogans such as ‘Stop Putin’, ‘Close the skies, save our families’, ‘Putin, hands off Ukraine’ and ‘Ukraine is Europe’.

The local police have about 2,800 demonstrators. “Because there are so many people present, we have closed the traffic above ground between Belliardstraat and Madou,” said spokeswoman Ilse Van de Keere. “Traffic in the tunnels is still moving.” The demonstration started at 2.30 pm and would last until 4.30 pm.

Yuliya Graneka, who lead the protest, said the war must be stopped immediately as innocent people were dying and being forced to migrate.

Graneka said Ukraine is a peaceful country, and Europe should help it against Russian aggression.

In a televised address, Putin said the people of Donbas asked Russia for help, claiming that he wanted to “demilitarise” and “denazify” Ukraine.

According to UN High Commissioner for Refugees Filippo Grandi, more than 150,000 Ukrainian refugees have crossed into neighbouring countries including Poland, Hungary, Moldova and Romania.

“Displacement in Ukraine is also growing but the military situation makes it difficult to estimate numbers and provide aid,” he said in a tweet.