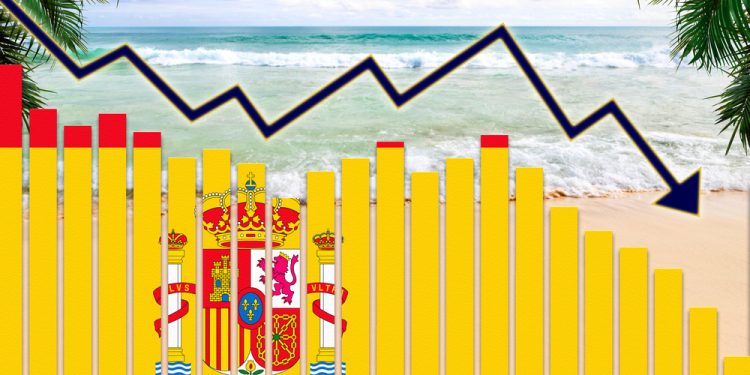 Brussels (Brussels Morning) Spain’s tourism revenues in 2020 are down more than 75%, making last year the worst since the 1970s, El País reports.

The decline in demand brought on by the coronavirus crisis is unprecedented as travel restrictions imposed to control the coronavirus pandemic severely undercut the country’s potential for tourism.

Official records show that about 19.2 million foreign tourists visited Spain in 1968, followed by some 21.7 million in 1969. The latest data for 2020 covering up to October shows 17.8 million visitors.

The Exceltur tourism lobby notes the National Statistics Institute (INE) expects tourism brought in approximately 46 billion euro overall to the economy last year, which is some 110 billion less compared to 2019 and comparable with results from 1995, when the INE started to keep records.

Reyes Maroto, Minister of Industry, Trade and Tourism warns tourism in Spain is facing the worst crisis in the country’s history. “This is because the two elements that define the very essence of travel are affected: mobility and confidence,” she points out.

The losses in Spain are in line with UN World Tourism Organisation (UNWTO) estimates for the sector in the coronavirus crisis. According to UNWTO’s latest report, tourism in 2020 dropped to 1990 levels as the number of arrivals dropped more than 70% in the course of last year.

Exceltur vice-president José Luis Zoreda warns tourism’s share of GDP most likely dropped from 12.4% in 2019 to barely over 4% in 2020. It has been the hardest-hit sector of the Spanish economy, he notes. “if we don’t receive significant financial aid, thousands of companies and hundreds of thousands of jobs will be lost.”

Raymond Torres, director for macroeconomic and international analysis at the Funcas think tank, predicted in December that the tourism sector would recover 40% this year and 80% in 2022. “The figures will continue to be way below what they are in normal years, but there will be a powerful recovery because we are now at a minimum,” he claimed.