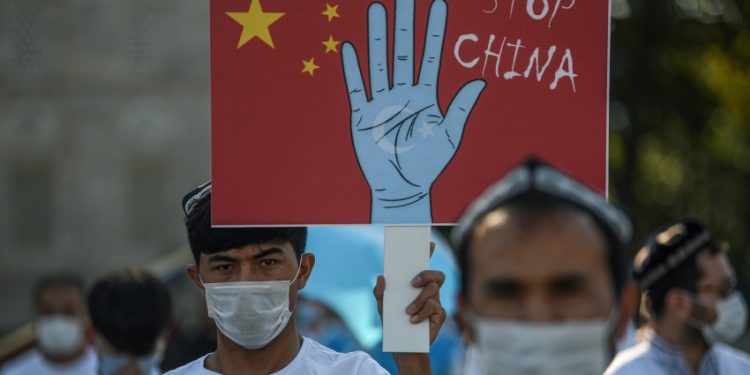 Speaking on behalf of the group, Germany’s Ambassador to the UN, Christoph Heusgen, called Beijing to task over its widespread surveillance practices, its treatment of Uyghurs and other minorities as well as reported forced labour and sterilization policies. China is violating basic rights including freedom of speech, freedom of the press and freedom of assembly, he said, as he also criticised Beijing for its authoritarian crackdown on Hong Kong.

The group condemned China’s treatment of Muslims in Xinjiang, where the UN estimates hundreds of thousands of Uyghurs have been held in so-called re-education camps. The Chinese Communist Party (CCP) insists the camps are vocational education centres set up to combat terrorism and religious extremism.

Pakistan, siding with China and speaking for 55 member states, claimed the West’s criticism of CCP’s authoritarian overreach amounted to meddling in China’s internal affairs. In a show of support for Beijing’s counterterrorism and de-radicalisation efforts in Xinjiang, Cuba, speaking as the designated representative of 45 member countries, defended the so-called re-education camps.

Zhang Jun, China’s Permanent Representative to the UN asserted there were no human rights violations in Xinjiang. He said Beijing was willing to invite independent observers as long as they were not trying to prove that China had done something wrong.

Surveys conducted by the Pew Research Centre show that criticism of China has grown more widespread in the West over the last year or so, reaching their highest point in a decade since Pew first started polling on the topic, according to reporting by Reuters. Of 14 countries surveyed, 61% of respondents expressed belief that China had handled the coronavirus outbreak poorly, while 78% indicated they had little or no confidence that China’s President Xi Jinping could be relied upon to do the right thing in the context of current world affairs.

On Wednesday, Beijing accused Washington of running a malicious smear campaign against the CCP and called on the US to call a stop to the criticisms. In Japan, the Chinese Embassy accused US Secretary of State Mike Pompeo of spreading lies about Beijing, stating that the US should abandon its Cold War mentality.