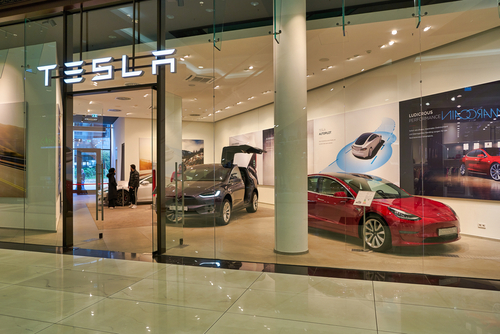 BERLIN, GERMANY - CIRCA SEPTEMBER, 2019: entrance to Tesla showroom in Mall of Berlin.

Brussels (Brussels Morning) The 5.8 billion euro Tesla Motors’ “gigafactory”, currently under construction in Gruenheide near Berlin, was intended to open on 1 July this year, the plan being to start production of the company’s all-electric vehicles in Europe.

However, unexpected red tape, planning tweaks and continued resistance from environmental groups are keeping the factory closed for now, leaving its owners unsure as to when the production lines will start churning out EU-made Tesla models.

According to the company, the factory will be the most advanced, high-volume electric vehicle production plant in the world. It is expected to employ up to 12,000 people and produce up to 500,000 cars annually. Tesla owner Elon Musk boasted that the factory would revitalise the local economy and put an end to Brandenburg’s working-age population having to migrate to other parts of Germany in search of jobs.

However, the factory has encountered stern opposition from environmental groups, since its construction zone partially overlaps a drinking water protection zone, and it borders on a nature preserve. Last year, construction hit another snag when environmental groups pointed out that it poses a threat to a rare indigenous snake species. This meant that Tesla had to rescue the snakes before it could proceed with the construction.

Despite the company’s preservation efforts, activists have continued to criticise the construction plans, which entail removal of thousands of hectares of forest to make room for the requisite infrastructure and housing facilities.

The factory currently awaits final approval by the Brandenburg State Environmental Agency, which says it cannot tell when the application would be processed. Even though Tesla pushed the opening plans back to the end of 2021, late approval from the state regulator could move the opening even further back, into 2022.

The company, used to operating in the US where red tape is less of an issue, has contributed to some of the bureaucratic delays it is experiencing. It changed its plans in mid-construction to include battery cell production in the future factory, a move intended to produce 500 million cells annually, which would add up to 50 gigawatt hours of capacity.