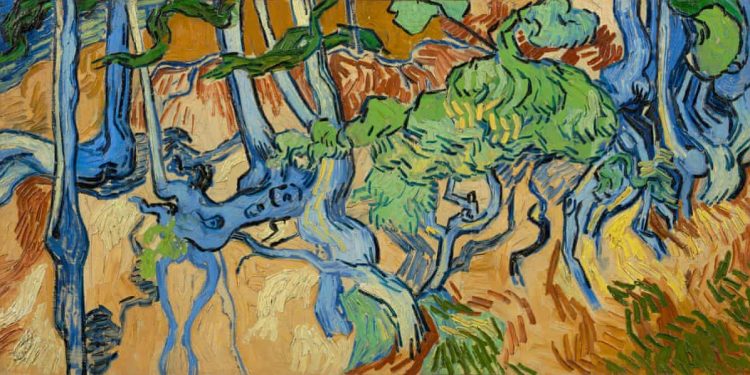 The exact location from where Vincent van Gogh is likely to have painted his final masterpiece, perhaps just hours before his death, has been pinpointed with the help of a postcard.

The scene in Tree Roots, a painting of trunks and roots growing on a hillside near the French village of Auvers-sur-Oise near Paris, was first spotted on a card dating from 1900 to 1910 by Wouter van der Veen, the scientific director of the Institut Van Gogh.

Following a comparative study of the painting, the postcard and the current condition of the hillside, researchers at the Van Gogh Museum and Bert Maes, a dendrologist specialising in historical vegetation, concluded that it was “highly plausible” that the place where Van Gogh made his final brushstrokes had been unearthed.

The main trunk in the painting has survived the 130 years since the Dutch master’s death.

It has long been believed that Van Gogh had been working on Tree Roots shortly before he took his own life with a shot to the chest.

Andries Bonger, the brother-in-law of Van Gough’s brother Theo, had described in a letter how the “morning before his death”Van Gogh had “painted a sous-bois [forest scene], full of sun and life”.

The site, put behind a wooden structure for its protection, was formally acknowledged at a ceremony attended by Emilie Gordenker, the general director of the Van Gogh Museum in Amsterdam, and Willem van Gogh, the great-grandson of Theo, on Tuesday.

Van der Veen said: “The sunlight painted by Van Gogh indicates that the last brush strokes were painted towards the end of the afternoon, which provides more information about the course of this dramatic day ending in his suicide.”

Teio Meedendorp, a senior researcher at the Van Gogh Museum, said the spot, some 150 metres from the Auberge Ravoux, the inn in Auvers-sur-Oise where Van Gogh had stayed the last 70 days of his life, would likely have been passed on a number of occasions by the artist before he decided to immortalise it on the canvas.

“The overgrowth on the postcard shows very clear similarities to the shape of the roots on Van Gogh’s painting,” he said. “That this is his last artwork renders it all the more exceptional, and even dramatic. He must often have passed by the location when going to the fields stretching out behind the castle of Auvers, where he painted several times during the last week of his life and where he would take his own life.”