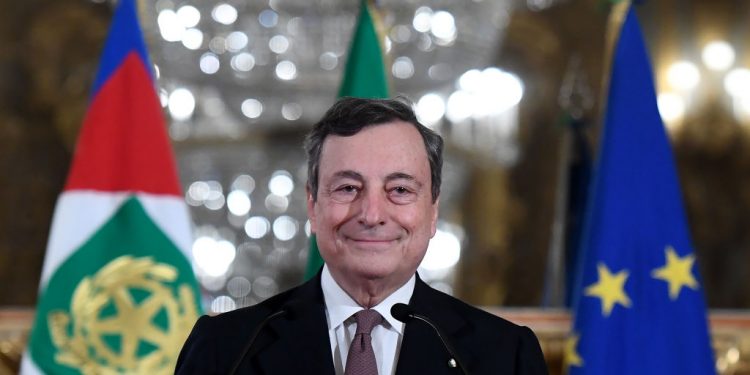 Mario Draghi, Italy's prime minister-designate, smiles at a news conference following a meeting with Italy's President Sergio Mattarella in Rome, Italy, on Friday, Feb. 12, 2021. Draghi agreed to take over as Italys next prime minister, naming his ministers as he prepares to head a new government that will prioritize the pandemic, a struggling economy and moving ahead with European integration. Photographer: Alessandro Di Meo/ANSA/Bloomberg via Getty Images

In forming his cabinet, Draghi opted for a mix of non-partisan technocrats, like himself, plus representatives of parties supporting his national unity government. None of the leaders of the parliamentary parties entered the cabinet, a stipulation Draghi’s insisted on in order to avoid a repeat of the political infighting that brought down the previous government, which had been led by a non-partisan expert Giuseppe Conte.

Eight of the 23 ministries went to non-partisan professionals. Analysts have noted that these included most of the sensitive positions tied to finance and the economy, creating a core “inner circle” within Draghi’s government. Other parties were awarded ministerial positions in proportion to their number of lawmakers.

The only party to remain in opposition was the far-right Brothers of Italy (FdI), which broke ranks with its allies in the right-wing bloc and withheld support from the Draghi government.

Draghi now faces the unenviable task of making the best use of 209 billion euro that the EU has earmarked for Italy as part of its coronavirus recovery fund – the largest amount in the bloc. Conte’s government fell because Renzi expressed doubt that he would be able to draw upon the funds and solve the three crises facing Italy – social, economic and healthcare.

As an experienced EU bureaucrat, former ECB head and former governor of the Bank of Italy, Draghi is probably best positioned to achieve this goal, and his wrangling of the parliamentary parties indicates he might be able to handle the political challenges, as well.

As part of his plan for using EU funds, Draghi created two new ministries – one for technological innovation and one for ecological transition – bearing in mind that the largest amount of European cash was designated for digitalisation and achieving carbon neutrality.
Draghi will now face confirmation in the Italian Parliament, with the Lower House voting on Thursday and the Senate on Wednesday. Given the parties supporting him, the former banker seems on course to win the largest majority in modern Italian history.