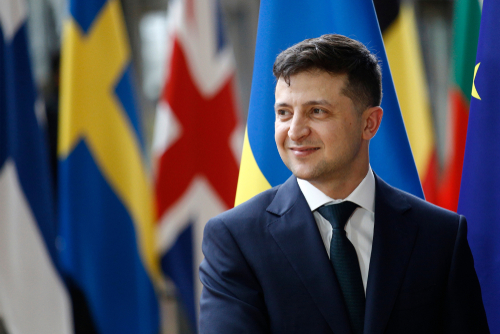 Brussels (Brussels Morning) Ukraine’s President Volodymyr Zelensky visited Paris on Friday for a meeting with France’s President Emmanuel Macron and a joint video-conference with Germany’s Chancellor Angela Merkel, as France and Germany affirmed their support for Ukraine in the grip of increasing tensions with Russia, France 24 reported.

“Ukraine’s sovereignty is under threat”, Macron stated ahead of the meeting. “All our work is aimed at avoiding an escalation and defusing tensions”. France and Germany have previously acted as mediators in the dispute between Russia and Ukraine.

The Franco-German efforts resulted in a ceasefire treaty signed last July between Kiev and Moscow-backed, pro-Russian separatists fighting against government forces in Ukraine’s eastern Donbass region. The ceasefire ushered in a brief period of peace to the region after years of fighting and more than 13,000 casualties.

However, ceasefire violations began to ramp up this year, with Kiev claiming that at least 28 Ukrainian soldiers have been killed to date in 2021, which compares to 50 in all of 2020. Meanwhile, the separatists claim they have lost 20 fighters since New Year. Moscow, which until now has only indirectly participated in the conflict, increased tensions in recent weeks by deploying increasing numbers of troops along its side of the border with Ukraine.

Zelensky has embarked on a diplomatic offensive in recent days, seeking support from Ukraine’s allies and looking to find sponsors for his country’s membership bid to join NATO, a goal Zelensky maintains offers the only long-term solution for bringing peace to Ukraine.

Moscow claims its troop movements are a response to “threatening” actions by the NATO alliance. Russian officials have made clear that Moscow would directly intervene in the fighting “to protect its nationals” in Donbass, should Ukraine attempt an offensive to reclaim its territory lost to separatists.
Both Merkel and US President Joe Biden have called on Russia’s President Vladimir Putin to withdraw his forces from the Ukrainian border. Moscow, insisting its troop movements are “purely defensive”, says the soldiers will stay where they are.