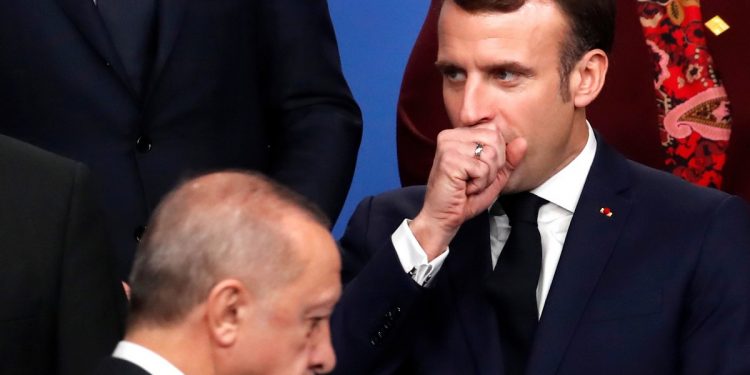 Belgium (Brussels Morning Newspaper) French President Emmanuel Macron was targeted by tomatoes during his first public appearance following his second round victory in the presidential elections on Sunday.

After spending the first couple of days away from public eye, contemplating a government reshuffle ahead of the parliamentary elections in June, Macron decided to make his first post-victory appearance in the town of Cergy-Pontoise, a Paris suburb where far-left candidate Jean-Luc Mélenchon won the most votes in the first round of elections.

During his visit, as he was meeting the townsfolk, Macron came under an unusual attack by fresh produce. A bunch of cherry tomatoes flew by close to his face. While none of them hit the French president, several splashed on bystanders.

His security detail jumped into action, shouting “projectile! projectile!”. They swarmed the president, covering his head with their hands, and then proceeded to protect Macron with a black umbrella. French agencies report the president was unfazed by the attack, and eager to move on with the visit, warning his security detail not to engage the attacker: “No! No! No fighting!”.

Facing a tight race in the presidential elections, Macron is likely eager to appear close to French citizens who have come to perceive him as arrogant and detached from everyday troubles of common people, frequently accusing him of being “a president of the rich”.

“In the poorest neighbourhoods, whether in cities or rural areas, we really need to create the conditions for real and effective equality of opportunity,” said Macron during the visit. “It is the only way to get rid of this distrust… and sense of abandonment.”

Macron’s habit of walking closely among French citizens has made it a nightmare for his security to protect him from angry individuals. In a previous incident in June 2021, Macron was slapped by a man while greeting townsfolk in another rural area.