Local residents do not want a catering terrace in Viaduct Park 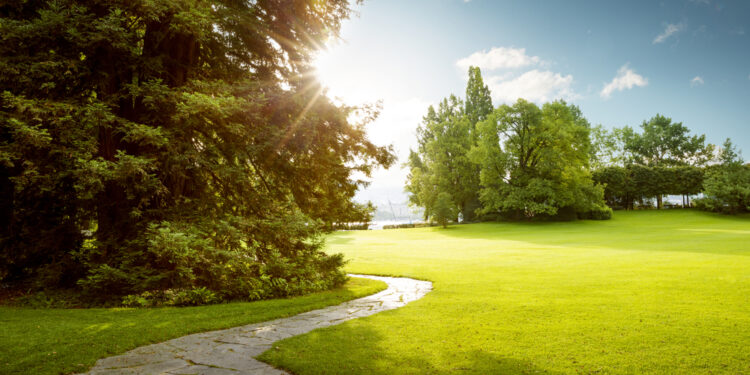 Brussels, (Brussels Morning)- In the Troonstraat in Ixelles, a construction promoter wants to develop two townhouses into apartments, coworking spaces and an as yet undetermined catering concept. The latter will be housed in a new pavilion at the back of the building, where the garden flows into the public Viaduct Park. “We will not allow that,” the municipality says. 220 residents have already signed a petition against the terrace, says BRUZZ.

The promoter has been submitting plans for a renovation of house numbers 216 and 218 of the Troonstraat since 2017, but the permit applications were never complete. A new application has now been submitted and the public inquiry is ongoing.

These are two buildings from 1868 in the same neoclassical style, which overlook the Viaduct Park at the back. The plans involve raising the roof of both houses to the level of the adjacent buildings.

Promoter Chambon à l’Os dreams of ten apartments, more than 700 square meters of coworking space and a catering business with a terrace. That would be located in a new pavilion on the edge of the Viaduct Park. As a result, the garden of both houses becomes a kind of inner garden, which can become semi-public, according to the plans. A new passageway should connect Troonstraat directly with the park via the inner garden.

Local residents fear nuisance. “The Viaduct Park is a calm place. We come there to meditate, rest, read or play guitar. Babies can sleep there, parents can let their children play freely,” they write in a (paper) petition that has been distributed in the neighbourhood. “The noise, smell and traffic (around the new pavilion) will disturb the soul of the park.”

Nearly 220 signatures have been collected so far, our editors learned. Among other things, the nature of the catering activity is touching. Today there is already a catering kitchen in the building in the Troonstraat, but it is used as a dark kitchen for delivery restaurants. The neighbourhood had previously protested  against the arrival of these and other dark kitchens, where meal couriers drive around often and late. The plans now refer to a kitchen that is almost four times as large as today.

“It is really not the intention to set up the new pavilion as a dark kitchen,” says architect Pierre Emans Fabro of DIA Architectures, who drew up the plans. “We are thinking more of a kiosk like La Fabrique en Ville in the Egmont Park, but with space for tastings and cooking workshops for the neighbourhood.” He emphasises that the pavilion and terrace will be completely private property. “Across from the park, that’s right, but not in it. With this project, the park will become more accessible and there will be more social control.”

The current majority of Ixelles does not take the plans too seriously. “It’s just a request. Anyone can apply for a building permit, even on land that does not belong to them. That does not mean that the municipality supports this project,” says Alderman for Urban Planning Yves Rouyet (Ecolo). He fears too much overlap between the private garden and the Viaduct Park in the plans. “We will not approve a terrace that is partly located in a public park.”

It is unclear whether the project will come to fruition soon. The public inquiry will in principle run until September 8, but the plans have not been correctly uploaded on the openpermits.brussels website . That is the applicant’s responsibility, emphasises the urban.brussels regional administration. Local residents can now only view the plans in the town hall, which makes it more difficult to lodge an objection. “We are therefore asking for a longer or new public inquiry,” says Alderman Rouyet.