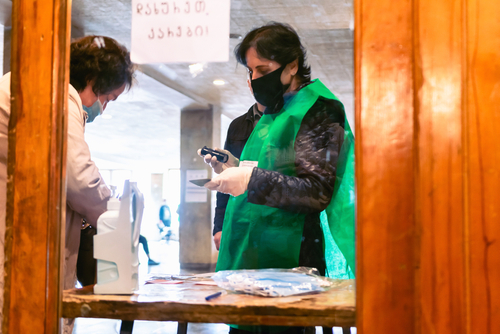 New York (Brussels Morning) The recently concluded local elections in Georgia are evidence of just how bogged down Georgian politics are currently. Like a bad sequel, a few new characters and minor plot lines were introduced this time around, but the basic plot remained the same. As in almost every Georgian election since the ruling Georgian Dream (GD) party came to power following its dramatic and unexpected victory in the 2012 elections, the biggest threat to the GD came from the party it defeated in 2012, the United National Movement (UNM).

Not surprisingly, as in every one of those elections, the Georgian electorate looked at both deeply-flawed political forces and decided that, on balance, it would be better off sticking with the GD. Despite being out of power for almost a decade, the legacy of the violent, semi-authoritarian later years of UNM rule has not been forgotten by Georgian voters. The upshot was that the GD won 46.7% of the popular vote while the UNM finished with a respectable 30.7%.

This year was supposed to be different, but then that has been the case with every other recent Georgian election. As the election season began, there was the usual hope that a third force would emerge. The difference this time was that the hoped-for third force was For Georgia, a political party led by former Prime Minister Giorgi Gakharia.

Gakharia’s reputation for earnest competence stems from his careful stewardship of Georgia through the early day of the COVID-19 pandemic. This was in stark contrast with the current pandemic disaster that is Georgia. The ex-Prime Minister was well-positioned to be an independent, having been ousted by Bidzina Ivanishvili, the paramount leader of both the GD party and the Georgian government. It also helped that he had no ties with the previous UNM regime. Yet, For Georgia finished third overall with 7.8% of the popular vote, having underperformed relative to expectations. Still, the outcome of these local elections gave the party a foundation on which to build, if not a lot more than that.

The more interesting plotline to emerge was the return to Georgia of former President Mikheil Saakashvili just as the voting began. Saakashvili remains at the helm of the UNM despite being indicted in absentia by the Georgian authorities in 2014. For years, Saakashvili had been promising to return, promises that tended to peak around election times. This year, however, Saakashvili honoured that pledge, albeit in a bizarre way, with a social media posting of a photo of his plane ticket from Kyiv back to Georgia. Then, apparently having for opted to eschew his flight , Saakashvili instead returned to Georgia, concealed in a truck.

On the morning of election day, Saturday, 2 October, rumours spread that Saakashvili was in Batumi, the Georgian resort town on the Black Sea. By the end of the day, the former President had been arrested. Saakashvili knew his visit would end in arrest and seemingly believed his detention would further undermine the legitimacy of the GD government.

Unfortunately, for him, news of his return and subsequent arrest has failed to become a major international issue, although this may be changing. However, looked at strictly from a political perspective, Saakashvili’s return could be deemed a success insofar as he managed to frame the election as yet another battle between the two titans of 21st century Georgian politics – himself and Ivanishvili. Ivanishvili won, but Saakashvili’s UNM finished a strong second and by doing so minimized Gakharia and any other possible third force contenders.

For Saakashvili, for whom attention is more important than victory, or even oxygen, this amounts to success. By returning to Georgia and making the election about himself, he pushed wavering votes that might have gone to third force parties back towards the Georgian Dream party. This did not amount to a major setback for the UNM, since, given that it was never going to win this election, its primary concern was to remain the leading opposition force. However, by helping increase the GD’s leading edge, Saakashvili has ensured that Georgia will remain entrenched in a political battle that seems destined to repeatedly let down the Georgian people.

While these local elections returned city councils and mayors across the country, they took place in the shadows cast by last year’s deeply flawed parliamentary elections, which they reflected, demonstrating anew the Georgian Dream party’s faltering commitment to advancing democracy.

After those parliamentary elections, foreign observers noted the faults but then pronounced that the results were essentially valid. Next, the opposition rejected the results, setting off a cycle of protests, arrests and boycotts soon labeled a “political crisis”. That crisis was essentially due to the GD’s unwillingness and inability to conduct good elections, but also due to the UNM-led opposition’s unwillingness to accept a resounding defeat that, regardless of the election flaws, generally reflected the will of the people.

The crisis was resolved through foreign intervention and a highly unusual agreement brokered by the European Union. The agreement, that a failure by the GD to get 43% or more in the subsequent local elections would trigger snap parliamentary elections, was absurd. Inevitably, it incentivised the GD to do whatever was needed to get past the 43% target, but it also served to ensure that the opposition would take to the streets should the GD’s margin prove to be mere points above the magic 43%. In the circumstances, it came as no surprise that the GD withdrew from the deal several weeks before the election took place.

The result of all of this is that Georgian democracy is stuck in neutral; or perhaps more accurately, it is stuck in a slow reverse. But, there are other losers from this election outcome as well. These are the foreign powers, specifically the EU and the US, which bought into the political crisis narrative several months ahead of the local elections, plus the subsequent arrangement about what would constitute an acceptable winning percentage, only then to do nothing when the government reneged on the deal. Moreover, despite their protestations and the statements following the controversial 2020 election, there is no evidence thus far that these recent local elections showed any improvement.

In other words, the west is losing influence in Georgia. The reason for this is simple: the Georgian Dream, perhaps intuitively, understands how little leverage the west has there. The US is not going to sanction Georgia or cut off assistance because of a flawed election or a slow rollback of democracy. Similarly, the EU still wants Georgia to be a success and is not going to walk away from that project.

This lack of leverage is reinforced by the gradual erosion of western, particularly American, soft power in Georgia. The deep flaws in American democracy have made it much more difficult for American opinion about elections in other countries to gain traction. After all, the US is a country where supporters of a losing candidate violently stormed the Capitol and continue to be supported by members of that candidate’s party; where access to the vote is increasingly limited; and where state legislatures empower themselves to counter the popular vote in elections.

No statement by the US Embassy, semi-governmental US organisations or by multilaterals that have strong American backing can be read without taking that context into consideration. The Georgian government understands that, while the US government is understandably confounded about how to address the problem. The result is the decline of US leverage and credibility and the continued erosion of Georgia’s democracy.