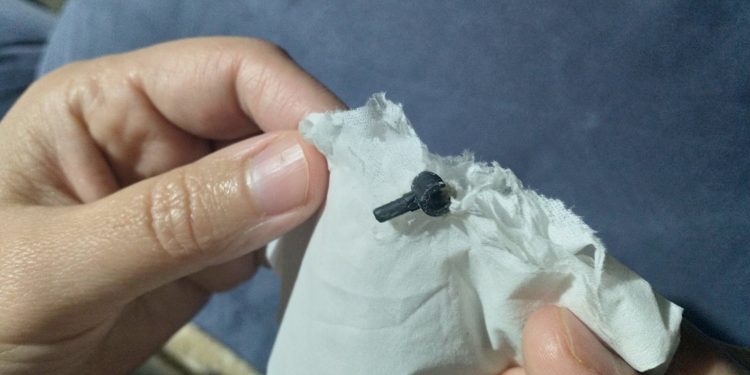 A missing piece of Lego has dropped out of a child’s nose two years after he pushed it up.

The concerned parents took their son to the GP, who was also unable to find, or remove it. The doctor advised them the piece would move through their son’s digestive tract, if it had even been there in the first place.

With Sameer showing no signs of pain or distress, his parents soon forgot about the ordeal. “Since then he’s never complained or anything,” Anwar said, telling the Guardian his son was “quite playful and a mischievous character”.

Anwar believes the piece was part of a Lego character’s arm.

Then last night, the “unbelievable” happened Anwar said. A plate of pink cupcakes prompted his son to lean down and take a great big sniff of them.

Immediately, his nose began to hurt. Thinking he’d sniffed up some cake crumbs, his mother helped him blow his nose, hoping to thoroughly clear his nostrils.

But instead of pink cake crumbs, out dropped a tiny piece of black Lego, covered in fungus.

“We never expected such thing,” Anwar told the Guardian. “The Lego piece looks a bit gross but that’s how it is. Unbelievable”.

Sameer, who remains an fan of the colourful plastic bricks, appeared delighted with the reunited piece, saying to his parents: “Mum, I found the Lego! You were telling me it wasn’t there, but it was there!”

It was not the first time Sameer has put something up his nose. When he was three he pushed an imitation pearl up his nostril, but in that instance, his father was able to retrieve it.

The errant piece of Lego had been wrapped in a tissue, and the family were still deciding what they should do with it, though Anwar had joked to his wife “that we should donate it to a museum”.

Lego pieces are commonly lost up children’s nostrils, as are beads and small pieces of food like popcorn kernels, peas, blueberries and grapes.

Items less commonly stuck up noses, according to kidsspot.com.au, include a glob of mince, a large piece of broccoli, a crayon and a rotting piece of leather.

In 2018 a team of doctors swallowed Lego and timed how long it took to pass through their bowels in an attempt to reassure concerned parents.