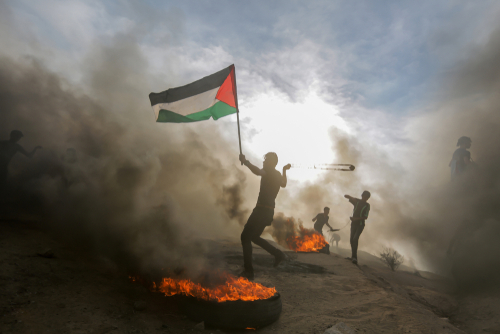 Paris (Brussels Morning) Airstrikes by the Israeli air force continue unabated on Thursday, causing widespread loss of life and destruction in Gaza, which witnessed its most horrific night since 2014.

The Israeli cabinet voted to escalate the assault on Gaza on Wednesday, where Hamas announced at least 83 people had been killed, including 17 children, and more than 500 injured.

A state of emergency has been declared in mixed cities, whilst flights to Tel Aviv’s Ben Gurion International airport are being diverted to Eilat in the South.

“Massive” security reinforcements are also being sent to mixed Jewish-Muslim cities within Israel, where groups of young Palestinians have clashed with Jewish extremists, Le Monde reported.

Army spokesman, Jonathan Conricus, told reporters that units were “ready” for a potential land invasion and indicated that “preparations for ground operations [are] at different stages”.

Draft plans are in place but have yet to be presented to the government, after Benjamin Netanyahu rejected a Hamas proposal for a ceasefire on a “mutual basis”, which was made through Russia, the Guardian reports. The militant group said several of its senior commanders had died in airstrikes, which targeted and destroyed dozens of buildings in the Gaza strip since Tuesday.

The United Nations Security Council (UNSC) will hold a public emergency meeting on Friday, in the presence of Palestinian and Israeli representatives, in an attempt to de-escalate. The UN, as well as Egyptian and Qatari diplomats are said to be working to bring a halt to the airstrikes.

But Israeli Defence Minister Benny Gantz, as reported in the Guardian, has declared: “Israel is not preparing for a ceasefire. There is currently no end date for the operation. Only when we achieve complete quiet can we talk about calm”.

A second emergency UNSC meeting was held on Wednesday, but no consensus on a draft statement or a resolution was reached. It was blocked both times by the US as a “counter-productive” outcome at this stage, with Track II diplomacy activated to reach a solution.

Meantime, US Secretary of State Antony Blinken spoke to Palestinian President Mahmoud Abbas, condemning the rocket attacks, while President Joe Biden, after a phone call with Benjamin Netanyahu, expressed optimism that the violence would end “sooner rather than later”.

Former Israeli ambassador to the US Danny Danon told Al-Jazeera that political differences, namely the pending formation of a government, have been set aside as the country is being attacked by a “vicious, terrorist organisation”, adding that “it is not a war yet, but we are united when our schools are being targeted by rockets”.