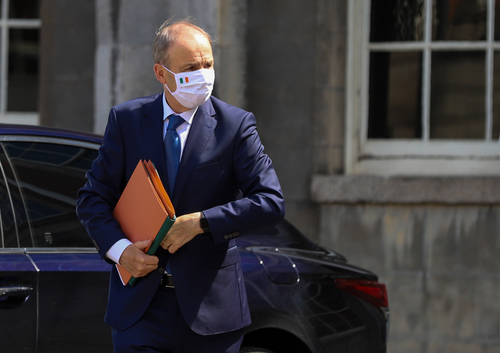 In response to the incident, the European Commission withdrew its staff performing the checks in Northern Ireland, with local officials withdrawn earlier.

Commenting on the intimidation, Martin pointed out that “it’s a very sinister and ugly development and obviously we will be doing everything we possibly can to assist and defuse the situation.”

A number of pro-British unionists oppose new trade obstacles between Northern Ireland and the rest of the UK that were implemented after Brexit.

After a local council pulled out staff over safety concerns, Northern Ireland’s government suspended some inspections at Larne and Belfast ports on Monday, with police announcing more patrols.

The council that pulled its staff from the Port of Larne warned that their safety was jeopardised, pointing to rising “sinister and menacing behaviour” which includes graffiti that describe port staff as “targets.”

According to the local mayor, intelligence warns that people are writing down port staff’s automobile registration numbers.

An unnamed senior member of the Democratic Unionist Party (DUP), which called on London to find a way to remove the new barriers, called for calm. The DUP partly blamed the EU for what it sees as mindless actions aimed at preventing export of coronavirus vaccines.

The EU invoked and quickly reversed emergency powers in the Northern Ireland Protocol in recent days as part of a showdown with the UK over coronavirus vaccines, which angered unionists.

An unnamed EC spokesman commented on the accusation, stressing that intimidation started before the EU’s move. “Whatever the reason, a threat of violence is simply unacceptable,” the spokesman concluded.

The region is still divided along religious lines as Catholic nationalists want unification with Ireland while Protestant unionists want to stay in the UK.