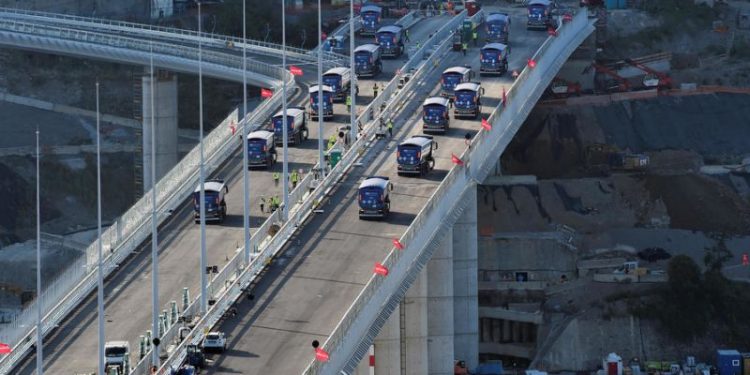 Relatives of the 43 people killed when the Morandi bridge in Genoa collapsed in 2018 have criticised the “celebration” that will surround the inauguration of the replacement bridge.

On Monday evening, planes creating colours of the Italian flag will fly above the new bridge, named Genoa San Giorgio, before it is officially opened by President Sergio Mattarella.

The structure, completed less than two years after the tragedy on 14 August 2018, will also be adorned with Italy’s green, white and red tricolour and the St George’s Cross, which Genoa adopted as its emblem.

There will be a minute’s silence and the names of the victims will be read aloud.

Their families will not be at the ceremony but have a private meeting arranged with Mattarella beforehand.

Egle Possetti, whose sister, brother-in-law, niece and nephew were among those killed, said: “I feel terrible. It’s a horrible day as everyone is celebrating. OK, the bridge is ready, but where is the attention on justice for the victims? The ceremony was supposed to be sombre, but now we see all the decoration – it’s almost like a wedding.”

In an interview with the Guardian earlier this year, Possetti said the Morandi bridge, which was beset with structural problems, should have been demolished long before it collapsed.Advertisement

Giovanni Toti, the president of the Liguria region, told the Italian press that the inauguration ceremony would be modest. He said “there is nothing to celebrate”, before adding that “work and commitment must be celebrated”. The first vehicles will cross the bridge from 5 August.

The ceremony will also be attended by the Italian prime minister, Giuseppe Conte, a host of other ministers and Renzo Piano, the Genoa-born architect who donated the design for the new bridge.

A team of about 500 people worked around the clock to complete the 1km (0.6-mile) structure, built by a joint-venture between WeBuild and Fincantieri Infrastructure. Construction continued during the coronavirus lockdown.

Piano’s design for the bridge, which stretches across the Polcevera valley, includes solar panels mounted on each side to generate electricity needed to power its lights and sensors. The bridge’s safety and durability has been prioritised, with robots deployed to inspect its solidity and conduct regular maintenance.

The new structure will restore a crucial route for commercial trade between Italy and France. The Morandi bridge, built in the 1960s, was essential for serving Genoa’s port as well as for residents crossing from one side of the city to the other and for holidaymakers making their way to the mountains or Mediterranean beaches.

Several executives of Atlantia, whose road tolls unit, Autostrade, was responsible for operating and maintaining the Morandi bridge, are being investigated for manslaughter. A trial is expected to begin early next year.

Benetton, the majority shareholder in Atlantia, was last month forced to sell its stake in Autostrade, which will be nationalised.