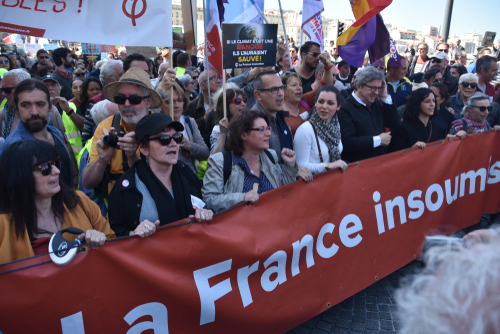 Belgium (Brussels Morning Newspaper) French far-left presidential candidate Jean-Luc Mélenchon held an election rally in Paris on Sunday, addressing a crowd numbering tens of thousands, where he presented himself as the exact opposite of incum bent President Emmanuel Macron.

The head of the France Unbowed (LFI) party is currently polling in third place, edging slightly ahead in recent days of Republicans’ (LR) candidate Valerie Pécresse, and trailing behind far-right candidate Marine Le Pen, leader of the National Rally (RN). Three weeks ahead of the first round of presidential elections, Macron still holds a comfortable lead, polling at least ten points ahead of Le Pen.

“Mélenchon! President”, his supporters cheered on Sunday, a chant which conveniently rhymes in French. The far-left leader delivered a 45-minute speech, highlighting all of his policy differences with the current president, as he positioned himself as the only true anti-Macron candidate.

While Macron wants to raise France’s retirement age from 62 to 65, Mélenchon pledged to return it to age 60, stressing the “time has come [to] put the people first”. Mélenchon also dismissed Macron’s planned school reforms, claiming they would lead to the “end of the one and indivisible French people”.

The far-left candidate previously rejected calls from French left-wing activists to participate in a leftist “primary” election of sorts, which was intended to unite the left behind a common candidate. However, his rejection of so doing did not hamper his popularity. The 70-year-old now regularly polls between 12 and 14%.

Even though Pécresse held the coveted second place in the polls for a while – essential in order to face the incumbent in the runoffs – she has slipped back since February, and is now polling at around 13%, playing leapfrog with Mélenchon from poll to poll.

Le Pen, who currently polls at around 18%, remains the most likely candidate to challenge Macron in the second round. If she does, this would be a rematch of 2017. To date, all second-round polls indicate the clash between these two candidates would end the same, with Macron clinching a confident win, 14 to 20 points ahead of Le Pen.