France, UK to crack down on illegal migration 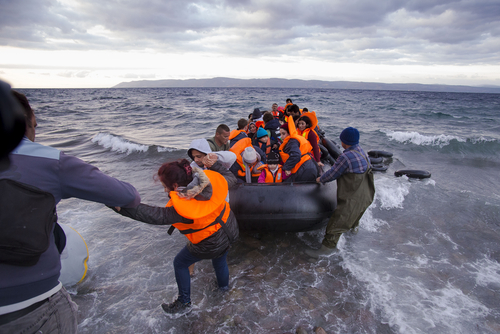 Lesvos island, Greece - 29 October 2015. Syrian migrants / refugees arrive from Turkey on boat through sea with cold water near Molyvos, Lesbos on an overload dinghy. Leaving Syria that has war

Belgium, (Brussels Morning Newspaper) France and the UK signed an agreement on Monday to crack down on illegal migration.

The agreement worth 72.2 million euros is aimed at stepping up efforts to prevent illegal migrants from crossing the English Channel, according to Reuters reported on Monday.

This year, more than 40,000 migrants crossed the Channel to enter the UK illegally, in contrast with 28,526 in 2021, increasing pressure on the UK and French authorities to take action.

UK Home Secretary Suella Braverman warned last month that the country was facing an invasion of illegal migrants crossing the Channel in dinghies.

“It is in the interests of both the UK and French governments to work together to solve this complex problem,” she noted in a statement after her Paris meeting with French Interior Minister Gérald Darmanin on Monday.

“There are no quick fixes, but this new arrangement will mean we can significantly increase the number of French gendarmes patrolling the beaches in northern France and ensure UK and French officers are working hand in hand to stop the people smugglers,” Darmanin noted.

He pointed out that the agreement shows France and UK’s resolve to crack down on illegal migration and prevent human trafficking.

Franck Dhersin, Mayor Téteghem, expressed concern that illegal migrants would not be stopped easily. “They don’t want to stay in Belgium, in Germany or in France… they want to go to England to see members of their family,” he pointed out.

According to UK authorities, the number of UK-funded officers preventing illegal migration in France will increase by 40% under the new agreement.

In an effort to improve coordination, the UK will send officers to French control rooms and on patrols with their French counterparts, which will facilitate sharing of relevant information.

As part of the agreement, the two countries will invest in drones, teams on the ground, and surveillance to detect and prevent illegal crossings.

According to the UK, authorities prevented more than 30,000 illegal Channel crossings this year. London notes that Albanians accounted for more than 40% of illegal migrants in the period between May and September, stressing that they are abusing UK laws to avoid deportation.