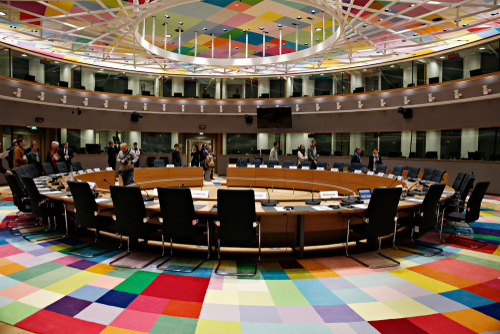 Plenary room in the European Council bulding in Brussels, Belgium on Dec. 10, 2016

Brussels (Brussels Morning) European Council President Charles Michel called for the departure of all foreign fighters from Libya during his visit to Tripoli on Sunday, Deutsche Welle  reported.

“You have created an opportunity to rebuild your country”, Michel told a news conference. “But there is one precondition – all foreign fighters and troops must leave the country”. He urged all political and armed factions in Libya to seize “the unique opportunity to build a sovereign, stable and prosperous country”.

Michel met with interim Prime Minister of Libya, Abdul Hamid Dbeibah, and declared anew the  EU’s support for the interim government, which, as part of an EU-brokered peace protest, is tasked with leading the country until free and democratic elections can be organised in December.

Libya descended into civil war following a French led NATO intervention after the 2011 uprising, in which the authoritarian leader Muammar Gaddafi was deposed and killed. The country soon became divided between the forces of the internationally-recognised Government of National Accord (GNA) and the Libyan National Army (LNA), headed by Field Marshal Khalifa Haftar.

Foreign forces flocked to the country, with Turkey sending troops in support of the GNA, while Haftar received direct help from Russian mercenaries, and is suspected of having received financial and military aid from Saudi Arabia, the United Arab Emirates and Egypt.

An internationally-brokered ceasefire agreement between the GNA and LNA led to the creation of a new Government of National Unity (GNU), and the appointment of Dbebiah’s interim cabinet.

“We will work with the new government and support it”, Michel told Dbebiah on Sunday. “The European Union actively supports the process of national reconciliation. Economic recovery, elections, the fight against illegal immigration… are areas in which the EU can help”, he said. Michel also announced that the EU ambassador would return to Tripoli in the coming weeks.

The foreign ministers of France, Germany and Italy had previously visited Tripoli in a show of support for the interim government. France re-opened its Libya embassy last month. Greece’s Prime Minister, Kyriakos Mitsotakis, is scheduled to visit Tripoli next week. Italy’s Prime Minister, Mario Dragh,i is set to visit at the same time.