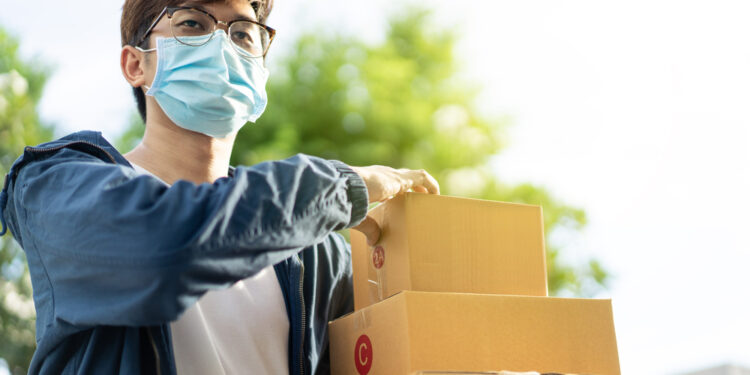 Brussels, (Brussels Morning)- If the neighbours are not at home, a package ordered online has to be returned to the distribution centre. But what if the neighbours accept the package for a small fee? That is the idea behind the ‘neighbourhood point’, a post collection point at people’s homes. The French start-up Welco is taking the plunge to Brussels, the Dutch entrepreneur ViaTim is following.

Welco is a French start-up that creates additional delivery points for postal parcels and is now also establishing a foothold in Brussels. The French-language business newspaper L’Echo reports about this . There is always a neighbour or woman available to take a package, the founder argued. In return, Welco promises 0.50 cents per package. In Brussels, about three hundred neighbours have already registered to become a neighbourhood point.

If things go well, the French start-up will then expand to the rest of Belgium and the Benelux. Welco has a partnership with delivery service UPS, the fourth largest delivery service for parcels in Belgium. But Welco is not alone. In the coming months, the Dutch company ViaTim will also roll out its network of neighbourhood points in Brussels. Together with parcel delivery company DPD, ViaTim is the second largest player on the Belgian market after Bpost.

“We already have one point in Woluwe-Saint-Pierre,” founder Michiel Nieuwkerk told BRUZZ . More points should be added in the coming months. “We are growing rapidly, often with 5 or 10 new points per week. In Flanders we started at the end of last year with ten neighbourhood points, now there are a hundred.” ViaTim also works with a small fee for those who keep the neighbourhood point open.

In contrast to a classic post collection point, the neighbourhood points are often also open in the evenings, which, according to Nieuwkerk, is the greatest asset in addition to their proximity. During the corona crisis, the delivery of packages shot up, but there is still a lot of traffic. “We are seeing unprecedented volumes of parcels passing through the sale of peer-to-peer platforms, such as second-hand clothing via Vinted,” says Nieuwkerk.

The Dutch company Homerr has also been active in Brussels for some time. That company has a network of collection points and neighbourhood points. In addition, unlike the other two players, Homerr also provides courier services.

bpost is investigating the possibilities

Bpost, the largest parcel deliverer on the market, has not yet started a partnership with Welco or ViaTim. “We are investigating the possibilities ourselves to expand our more than 2,500 collection points,” says Veerle Van Mierlo, spokeswoman for Bpost. Van Mierlo cannot say at the moment whether Bpost will go for neighbourhood points such as Welco and ViaTim.

However, Bpost started a pilot project with the City of Mechelen that should also shorten the last few kilometres to the customer. Parcel machines were installed throughout postcode 2800, always within walking or cycling distance of the resident. The parcel lockers are accessible day and night and can be opened via the Bpost app.

“As much as twenty percent of deliveries are missed deliveries,” explains Cathy Macharis, professor specialising in sustainable mobility and logistics. “This means that the deliverer will offer it again or has to send it back to the distribution point. A solution to this problem has been sought for a long time. This ranges from locker systems and collection points to delivering parcels in the trunk of a car or giving the courier access to the house.”

Delivering to the neighbours is certainly not a bad option, Macharis thinks. “If there are not enough other points, such a private delivery point can certainly be a solution. The points can also promote social contact between neighbours.” Still, Macharis looks somewhat hesitant at the new players in the sharing economy market. “I remember how Uber was once launched as a service to ride with a driver who had to go that way anyway.”