Anderlecht: ‘Up to 15,000 new residents expected in new construction on the canal’ 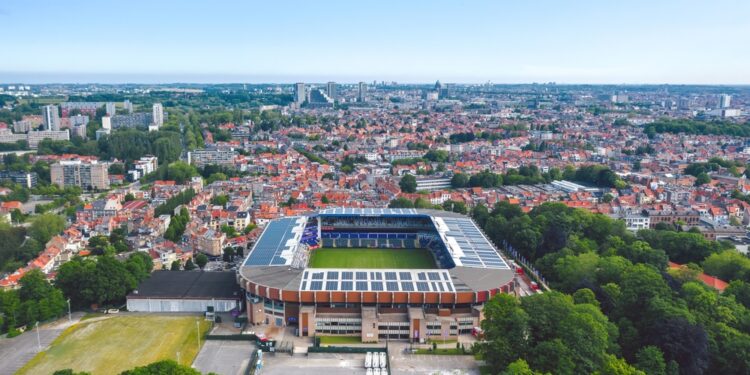 Brussels, (Brussels Morning)-  Along the canal, Anderlecht is being filled with new residential towers at a rapid pace near the Biestebroek dock. According to the BRUZZ, this will lead to a population growth of about ten percent in the future, good for 12,000 to 15,000 new residents.

Construction promoters discovered the canal in Anderlecht some time ago. The plans for some residential towers such as Urbanities have been on the table for a while, other construction projects such as City Dox have been (partly) completed. Now there is also a permit for six new apartment buildings on the former Shell site, north of the Biestebroekdok, says La Dernière Heure.

The Dock , as the project is called, will have an underground car park and on the ground floor there will be space for shops and catering. It is not yet clear how many residential units the future complex will have. Social or conventional housing is not part of the plans.

The Biestebroek district is in full development. In time, according to the municipality of Anderlecht, it will have 12,000 to 15,000 new inhabitants. Mayor Fabrice Cumps (PS) and Alderman for Urban Planning Alain Kestemont (Défi) hope that the district will not only become attractive to live in, but also for traders and catering businesses. “No one will regret the Biestebroekdok,” said Cumps.

In any case, the new construction plans are causing protests from local residents. They fear that the new neighbourhood will fall prey to gentrification. “We’re not excluding anyone, so there’s no gentrification,” Cumps said. The mayor recently issued a decree against the occupation of a site where A’Rive is to be located, the former Key West.

Some thirty activists are occupying an old building for the second time that has to make way for residential towers with a total of more than five hundred housing units, according to the activists in protest against gentrification. A’Rive had a permit , but BRAL and Inter Environnement Bruxelles appealed against it. The permits had been revoked, as a result of which the 60,000 square metre construction project – one tower would be 84 metres high – has been put on hold for the time being.

Urbanities , a project with 680 residential units in three fourteen-storey residential towers, received the necessary permits in January. “We are postponing the start of the construction site for a while because of the high raw material prices,” says a manager of construction promoter Aboreal to La Dernière Heure.

City Dox by Atenor has already taken shape and today already has 345 homes, 99 of which are conventional middle-class homes. Three other residential blocks are currently under construction, two buildings with 171 residential units and a smaller building with 74 residential units. Atenor wants to sell one of the two blocks with 171 apartments for about 75 million euros. By 2026, the promoter wants to apply for an additional 160 housing units. The site already has 8,000 square metres of office space.

In addition, there are Citydev’s construction projects with social and middle-class homes. In front of City Gate 1, one section with 118 apartments has already been built. 35 residential units are to be added by the end of this year, and another 96 residential units by the end of next year. The start of work on Klein Eiland/Citygate 2, a project in collaboration with the executive client BGHM (Brussels Regional Housing Company), is planned for early 2024, but is currently still in a study phase. In addition to the construction of a French-language school, the project includes 364 homes, 256 of which are social housing. The future of City Gate 3 is a little less concrete. That project includes 16,000 square feet of housing on the old Leonidas site. A planning application is likely to be submitted in the course of 2024.