by Aziz Isa Elkun
in Opinion 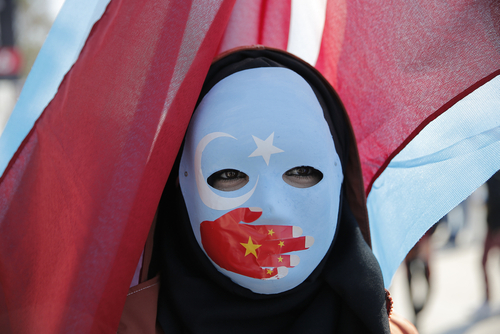 As a Uyghur, I’m urging the world to start acting on the genocide of China’s Muslims, writes Aziz Isa Elkun.

London (Brussels Morning) I am an ethnic Uyghur, born in the Uyghur homeland. I grew up in a remote village which is 300 km away from the Chinese Lop Nur Nuclear test site.

What do I remember from my early childhood? First comes the red guards of the “Chinese Cultural Revolution”, then starvation, then the sandstorm dust from the nuclear site.

I graduated from “Xinjiang” University in 1991, then, I was offered a public administration job in Aksu city. Six months later, I was fired with the accusation of ‘separatist action’ against the ‘Chinese motherland’. I then joined the ranks of the unemployed, along with millions of Uyghurs in the 1990s. What ensued was not pleasant. As a Uyghur, I experienced harassment and racial profiling. I came to the UK seeking political asylum in 2001 and settled in London.

Actually, I found the accusation of separatism by the Chinese Communist regime farcical. It’s hilarious that a 16-year-old high school student can face allegations of attempting the dismemberment of the ‘Chinese motherland’. My only ‘crime was writing a poster: “We remember 12 December Urumchi Uyghur student demonstration, we demand equal rights and democracy for the Uyghurs …”; and I posted it on the headmaster’s office door.  Although this incident happened 35 years ago, the memory is fresh, and the wrath of the Chinese Communist Regime made me a true “dissident”, living a life in exile.

To be clear, the Uyghurs never aimed to separate Shanghai or Beijing or any Han Chinese territory. But we are trying to survive the Chinese genocide. We wish to live in our own independent country, peacefully, with our dignity and rights, preserving our language, culture and heritage.

The Uyghurs are ethnic and linguistically a Turkic people; they began to believe in Islam in the 10th century. Throughout their 4,000-year history, the Uyghurs established many independent states like Uyghur State in the 7th century; the Karakhanid State in the 10th century and Uyghur Saidiye State in the 15th century.  The Uyghur homeland is in the heart of Central Asia, stretching along a landmass bigger than Western Europe and providing more than 40% of China’s critical natural resources. It was officially designated as the Uyghur Autonomous Region by the Chinese constitution in 1955, five years after the Chinese occupied the whole region with Stalin’s military assistance.

Therefore, geographically, culturally and historically, Uyghurs prefer to call their homeland East Turkistan, after the name of the two short-lived East Turkistan Republics established in the 1930s and 1940s. But many Uyghurs of the Diaspora, especially in Kazakhstan and Kyrgyzstan, refer to their homeland as “Uyghuristan”. Obviously, the name of “Xinjiang” is considered colonial and politicised. In Chinese, Xinjiang means “new territory,” a term first used by the Manchu empire when it occupied the Uyghur homeland in 1884. Chinese Nationalists and Communists inherited this colonial name, which Uyghurs regard as offensive.

Since 2016, Chinese President Xi Jinping started pursuing ethnic cleansing policies towards the Uyghurs. Under his brutal regime, over 3 million Uyghurs are detained in internment camps within the Uyghur region. The regime has built a massive network of camps or “modern high-tech surveillance prisons” across the region. Media reports talk of camps with up to 10,000 detainees.

China is not only mass arresting millions of innocent Uyghurs but also deliberately targeting Uyghur intellectuals, including academics, writers, poets, artists, teachers and medical doctors and so on. Beijing often claims that these camps are built to “re-educate Uyghurs” and offer “vocational training”. But these intellectuals do not need re-education or vocational training.

Uyghurs in exile are also suffering because China has cut off all communication between Uyghurs at home and abroad.

My father passed away on 4 November 2017; I heard about his death four days later through a friend. I am the only biological child of my parents. I hoped to visit my parents and look after my ill father, who did not have much time left to live, but in 2016 the Chinese embassy in London refused my appeal for a visa on humanitarian grounds. After New Year 2018, my communication with my elderly mother was cut off. Since then, I have no news about my mother and other relatives from our village.

On 15 April 2019, I discovered from Google Earth that the graveyard and tomb of my father were all destroyed. My father stayed in his tomb for only 623 days. I felt as if my father’s body had been brutally torn out of its resting place in our ancestors’ land.

For many years now, the Chinese government has become obsessive about Uyghurs’ Islamic beliefs, but China must understand that Uyghurs’ belief in Islam existed 1,000 years before they established China’s Communist regime.

As a Uyghur, I would like to note that China can perhaps change the Uyghurs’ way of life through systematic and forced assimilation. But our hands and minds are more resilient.

Many of you know that China’s genocidal campaign did not start with the notorious Concentration Camps, set up in 2017, it started with the occupation of the Uyghur homeland in 1949. Now the US, Canada, the Netherlands and the UK parliaments and governments recognise that what happened to China’s Uyghurs and other Turkic Muslim people is a genocide. We hope more western democracies will join that list sooner rather than later.

It’s an absolute moral and principal obligation of the world, including all UN member states, to save innocent people’s lives from genocide. The human consciousness of the world, especially the western countries, cannot afford to stay idle while another “never again” holocaust is happening in the 21st century. The world must protect the Uyghurs and save their lives from China’s genocide. It’s too dangerous for the world that China can go free so long with its crimes against humanity while deceiving the world with its lies.

It is in everyone’s interest for the world to be a peaceful place where all humans can live happily regardless of their race, faith, colour and culture. Therefore, the world must hold China accountable for genocide against the Uyghur people.

Aziz Isa Elkun is an academic and project director of Uyghur PEN.