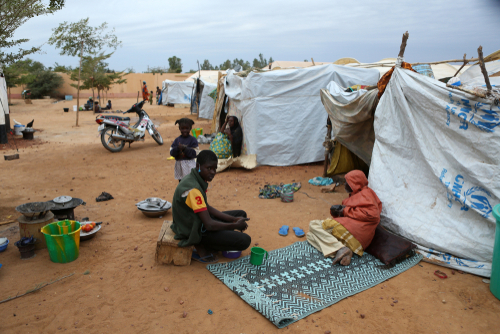 26 Jaunary 2013. Bamako/Mali Mali, or officially the Republic of Mali, is a landlocked country in West Africa.

Brussels (Brussels Morning) Mali is in a state of protracted humanitarian emergency due to the security situation and the political crisis that saw the president ousted in a coup in Bamako in August. A military junta assumed power,  promising a return to civilian rule next year.

“Mali has literally collapsed”, says Dr Manu Lekunze, teaching fellow at the University of Aberdeen, UK. “In fact, the military took over because society and the government collapsed. The military control is very limited, though.”

Lekunze is alert to the fact that what is happening in Mali is symptomatic of what is happening throughout  the entire region, given the similarities in political culture. “The same disorder makes its way into Burkina Faso and also Niger is in a very similar situation”, he says.

France and the EU get it wrong in Mali

The French-led counter-insurgency operation in the Sahel, Barkhane, is attempting to keep the peace in northern Mali while UN peacekeeping forces are present in parts of the country. However, large areas in central and northern Mali are controlled by numerous Islamist and other armed groups.

“It is as if the French do not yet understand what is happening”, Lekunze says. “Society is governed by social norms but when the entire society collapses, as in Mali, there is no police force on earth that can cope. France is putting in a police force in military form to rebuild society, but that will simply not be possible. They don’t have the money or the human resources to do that.”

The EU is present with a civilian mission to support the national Malian police with advise and assistance, in addition to a training mission that seeks to strengthen the Malian armed forces. Another EU regional intervention in Niger is aimed at tackling organised crime and terrorism.

“That is how France and the EU now are doing the right thing but in the wrong way”, Lekunze argues. “They need to understand that a society should evolve at its own pace to prevent a collapse. Right now, Mali has collapsed. The state, and France by connection, is an occupying force, and it is human instinct to resist an occupying force. Whatever France does, it will be resisted. France has been in that region for over a century, yet the new resistance is based on the breakdown of society.”

Lekunze traces the roots of the problem to the modernising influence of democracy that created new power structures within Malian society that did not cohere with the traditional roles of authority.

“What happened is that Mali introduced municipalities in the same way as France by way of decentralisation. But that allowed for local elections which could select random people to become an authority within a very conservative society which relies on traditional chiefs and imams. New offices or non-traditional authorities broke the fabric of society.”

People’s livelihoods in a demanding physical environment were affected by weak public  administration which failed to provide basic services in a country marred by conflict, while large areas of the country remain outside government control.

Since the Tuareg insurgency in 2012, a disturbingly high number of atrocities have been committed against civilians. A recent UN investigation lists retaliatory attacks on villages with sexual violence, murder, maiming and rape being committed by groups also linked to the now ruling junta. Some of the armed groups have been scattered by international forces. However, the peacekeepers have come in for their share of criticism too.

Some Malians contend that they have failed to deal with the atrocities, in particular the summary executions and forced disappearances. Still, other parts of the population rely on armed groups in the absence of public government. Jihadist groups merge with organised crime in order to make a living. Agreeing to peace would mean giving up livelihoods often based on human and drug trafficking. Also, the increase in irregular migration passing through Mali has raised its profile higher on the EU’s agenda.

The official UN inquiry recommends setting up a court for the prosecution of crimes against humanity, but the report is pending a UN Security Council debate. If the report is transferred to the International Criminal Court in Hague, it may serve as a basis for prosecution for war crimes, or a tribunal could be set up in Mali.

“The UN operations in Mali are keeping whatever peace they can but they have all sorts of problems”, Manu Lekunze explaiins. ”There are boots on the ground but we have to think more deeply on reconstructing Malian society. It has to be a local village-by-village process, which cannot be achieved by bringing in the army and dropping them from the sky.”

At present Mali’s military government is open to pursuing dialogue with armed groups which may bring a shift in the security situation.

“The military may hand over but that would not change anything,” Lekunze argues. “The civilian government was completely useless. It was removed because of high levels of corruption. In the army, there are huge scandals of corruption. The military will try to hang on, but only international pressure could push them out.”

Other researchers argue that the Malians are disenfranchised because of the worsened security situation and the continuation in power of the same groups of elites. Any reshuffling or re-ordering of power risks being little more than a switch between existing elites. According to these researchers, corruption is endemic and the international donor programmes demonstrate limited impact.

The international community’s approach on capacity-building projects to assist the national administration is plagued by a lack of absorptive capacity and funds wastage.

“The perception is that international donor money makes little difference, because of the kind of projects the EU is promoting”, Lekunze says. “We have to look deep at local structures of society. And think of how to engage in this reality and how societies transform. The fact is that much of what has been done in Mali since 1991 has failed, so we know that what has been done in 30 years does not work!”