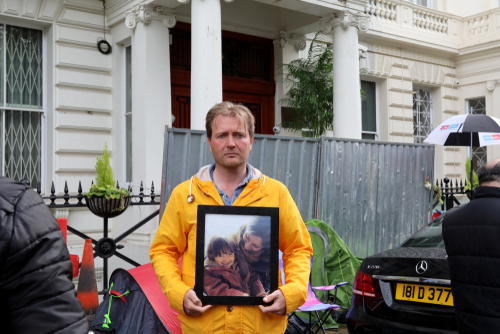 London / UK – June 19, 2019: Richard Ratcliffe outside the Iranian embassy in London where he is staging a hunger strike in support of his wife Nazanin Zaghari-Ratcliffe, jailed in Iran

Brussels (Brussels Morning) British-Iranian citizen Nazanin Zaghari-Ratcliffe was released from Iranian custody on Sunday, having served her internationally-disputed five-year prison sentence for spying. She now faces new charges, making it unclear whether she is free to leave the country, AFP reports.

Zaghari-Ratcliffe was arrested at a Tehran airport in April 2016, while working for the Thomson Reuters Foundation. She was charged and convicted of plotting to overthrow the Iranian regime,  a move which attracted serious condemnation from global rights organisations, the British Foreign Office and other western governments.

After serving the majority of her five-year sentence in Evin prison in Tehran, Zaghari-Ratcliffe was released to house arrest in March last year, during the coronavirus pandemic, the authorities keeping track of her via the use of an electronic ankle bracelet.

On Sunday, her attorney, Hojjat Kermani, confirmed on Sunday that the bracelet was removed and she was officially set free. However, she received a new court summons accusing her of propaganda against the Islamic Republic, a charge related to her participation in a rally in front of the Iranian Embassy in London in 2009.

British Prime Minister Boris Johnson welcomed news of her release, emphasising that her confinement remains totally unacceptable. “She must be released permanently so she can return to her family in the UK, and we continue to do all we can to achieve this”, Johnson said.

According to Zaghari-Ratcliffe’s husband Richard Ratcliffe, his wife was kept by Iran as leverage for the Iranian regime to seek repayment of a decades-old debt from the UK, stemming from the the late Shah Mohammad Reza Pahlavi’s payment of 467 million euro Chieftain tanks, which were never delivered following the Islamic Revolution that took place in 1979.

Kermani stated he hopes the new charges raised against Zaghari-Ratcliffe will be dismissed, but noted that it is unclear whether she would be allowed to leave the country should she attempt to do so.