Young and old present at the first climate march of 2022 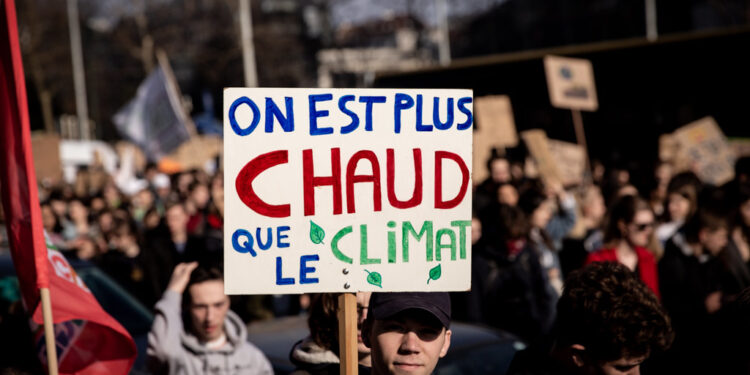 BRUSSELS (Brussels Morning) – Last afternoon, for the first time this year, another climate march passed through Brussels. The activists gathered at Albertinaplein and walked towards Brussels South. They especially wanted to draw attention to climate justice. “It’s less than one to twelve, we have to remind our policy makers again.”

The march through Brussels was part of an international campaign set up by Fridays for Future, an international organisation of climate activists. Youth for Climate was also involved in the organisation. In advance, the organisation counted on about 5000 activists. In the end, about 2,000 got off the entire route to Brussels-South. What was most noticeable among those present was the great enthusiasm. “You can feel that the climate problem has only become more prevalent in the living environment of young people in recent months,” says Boon Breyne of Fridays for future.

Several school groups were also among the activists. “We are truant, but the school has made it possible for us to be here. In this way, we can demonstrate together that too little action is still being taken,” said a group of students present at the GO Atheneum in Oudenaarde.

We also found the same enthusiasm among other truants. “It is true that there may be less people today than at the height of the climate marches a few years ago. But the people who are there are there out of conviction and not because they want to be part of a hype. It has to be, because the climate is not a hype. What we need are concrete actions,” says Emilie Delmotte, a student at the Steiner School in Leuven. “Because I’m here, I’ll get a criminal trial. But this will also be dominated by a climate via an assignment. So the school does support our commitment.”

With the slogan #PeopleNotProfit – also the most recurring message on the many banners – the activists wanted to emphasise that people must be central to the solution to the climate issue. “The emphasis in the climate debate is currently very clearly on technical solutions. I am thinking, for example, of the discussions surrounding the choice of certain energy providers. But the root of the problem, namely the lack of human justice in the system, remains underexposed,” explains Breyne.

In line with this philosophy, the organisation reiterated the existing demand for so-called “climate repairs,” whereby the wealthier countries must provide additional financial resources for countries from the south, which are today most affected by the effects of climate change.

“The injustice that is currently still ingrained in the system is also noticeable in our country. This was also noticeable during the floods in Wallonia last summer. Here too, poorer population groups were hit much harder. That shows how important justice is at all levels in tackling the climate issue,” Breyne continues. “Justice must be an essential part of all measures. People with lower incomes should not bear the brunt of the decisions taken,” adds Serrana.

The fact that the amount of particulate matter in Brussels just today exceeds the permitted limit, according to the demonstrators, only shows how pressing the problem is. Serrana said: “In Brussels, there are a lot of neighbourhoods that struggle with concentrations of particulate matter that are too high. That is very harmful to the health of Brussels residents.”