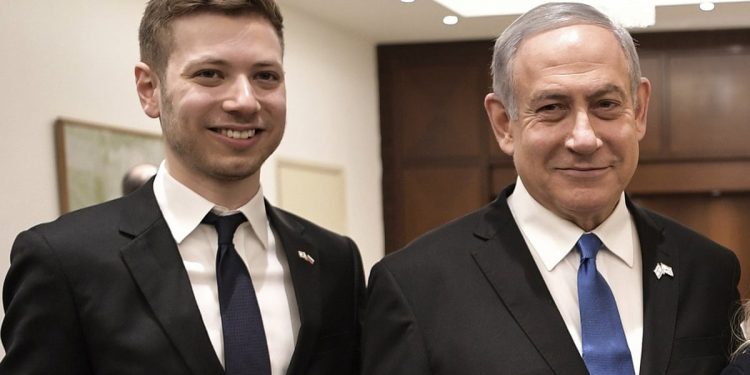 Israel’s Benjamin Netanyahu has long been accused of dog-whistle politics but in a battle for political survival, sometimes a whistle won’t do. For that, a foghorn is needed.

Enter Yair Netanyahu, the leader’s 29-year-old son. He has increasingly emerged as his father’s attack dog, defending the prime minister as he faces relentless protests and widespread public anger over his government’s handling of the country’s coronavirus crisis and charges of alleged corruption.

While the older Netanyahu has branded the protesters as anarchic leftists intent on violence, Yair has gone further in dismissing them, describing how his father has laughed at the demonstrators.

“It amuses him … It’s like a kind of entertainment,” he told the Galei Yisrael radio station. “It entertains him. It even gives him a bit of strength.”

The father-son duo has emerged as a useful tool for world leaders. Without the shackles of expected decency associated with high office, children can act as unfiltered proxies for their powerful parents, spreading what is interpreted as the raw truths of their fathers’ message, even if they do not officially speak on their behalf.

Yair is not alone in his role. Donald Trump Jr has fought some of the dirtiest fights for his father, mostly recently by falsely insinuating that the US Democrat presidential candidate, Joe Biden, was a child sex abuser. Meanwhile, in Brazil, Eduardo Bolsonaro, the son of the far-right president, Jair Bolsonaro, suggested hardline dictatorship-era tactics would be needed to crush leftist opponents.

In Israel, Yair has long had a reputation for trolling his parents’ enemies and rousing hatred online. In 2018, he was temporarily banned from Facebook after writing that he would prefer all Muslims to leave the country. In April, he called for a “free, democratic and Christian” Europe to replace the EU.

But the recent demonstrations have given him new vigour and prominence, especially on his Twitter account, which has more than 90,000 followers and is picked up daily by the Hebrew-language press.

Earlier this month, an Israeli court ordered him to take down a tweet that showed the names, home addresses and mobile phone numbers of three prominent protesters.

“I invite everyone to come to protest, day and night … at the homes of these people who have been organising the anarchy in the country for all of us in recent weeks,” he had said. The protesters said they had received threatening calls after the tweet was sent out.

At other times, his posts have been dismissed or laughed off. However, with unemployment soaring above 20%, and with resurgent coronavirus infections severely threatening people’s livelihoods, his comments about the demonstrators have touched a nerve.

Writing in the left-leaning Israeli newspaper Haaretz, Tchia Dov, slammed the “crown prince” and “spoiled playboy” as enjoying ice cream and laughing at home with his dad about the protesters.

“Students who have lost the jobs that helped them pay tuition, people who can’t pay their home mortgages, who won’t be able to pay for daycare and preschool – that’s all a joke. People in the entertainment industry who haven’t earned a cent in months, banquet hall owners, grounded pilots and crew – all are in effect a cause for laughter for the royal family,” she wrote.

In the country’s top-selling Yedioth Ahronoth newspaper, another writer, Raanan Shaked, accused Netanyahu of spreading hatred and division among Israelis and then mocking them.

“We aren’t here for your personal entertainment. We live here. We’re Israelis,” he wrote.

“We come seeking peace. But if that’s currently unavailable, we’d be glad to take healthcare, welfare, a functioning economy, overcoming the coronavirus crisis and, more than anything, reconciliation.”

In a statement sent to the Guardian, a Netanyahu family spokesperson said Yair did not speak on behalf of his father. “The things he writes and says are on his mind and represent his positions.”

It rejected claims that Yair had “nullified the legitimacy” of the protests, adding he believed in the right to demonstrate. However, the statement complained of what it said were death threats towards the prime minister, allegations of violence against police by demonstrators as well as claims of protesters ignoring social distancing rules, which it said created a “corona hatchery”.

“Then it turns from a legitimate protest into anarchy.”