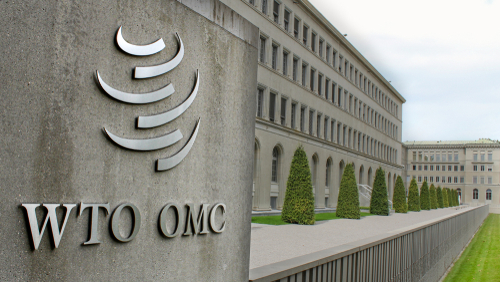 The idea is discussed at WTO’s first ministerial meeting since the end of 2017 that is being held in Geneva from Sunday to Wednesday, according to France24 reporting on Monday.

Some WTO members that host with large pharmaceutical companies have objected to the plan, as have all pharmaceutical giants, warning that the move will stifle innovation and investment.

Pharmaceutical companies stressed that the plan no longer makes any sense because countries now have too many rather than too few vaccines.

WTO members presented their positions on the matter after the opening ceremony on Sunday, after which ministers from 164 WTO member countries started discussing the plan.

Daniel Pruzin, head of the press section at WTO, noted on Monday that “there is continued cautious optimism about getting results at this ministerial conference.”

He described the talks as “problematic,” but pointed out that officials are getting closer to an agreement on the waiver.

Switzerland against the move

Swiss Ambassador Markus Schlagenhof pointed out “pretending that a sweeping IP waiver would solve the problem does not correspond to reality… IP is not part of the problem, but part of the solution.”

Anne-Marie Trevelyan, UK Secretary of State for International Trade, noted that the officials are looking for a solution that is acceptable to governments and companies.

Activists criticised the proposed text of the waiver, stressing that it does not include diagnostics and treatments other than vaccines.

They organised a protests in the central atrium of WTO headquarters carrying placards that read “end vaccine apartheid” and “no to monopolies on COVID-19 medical tools.”

Protest organiser Deborah James pointed out that the process started roughly two years ago and stressed “it’s an indictment of the WTO system: it’s completely broken, it can’t respond to a pandemic, it has no ability to put anything other than maximising profits for corporations ahead of anything else.”

India, South Africa, the US and the EU proposed a compromise according to which more developing nations would be allowed to make COVID-19 vaccines without approval from intellectual rights holders.