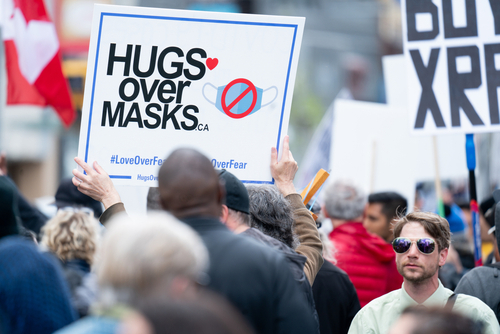 Brussels (Brussels Morning) Protests against COVID-19 restrictions have erupted across the EU and other parts of the world as governments reimpose curbs.

In the Netherlands, protests turned violent on Saturday, when rioters threw rocks at police. Five officers were injured and received hospital treatment, while at least 40 people were detained, police reported.

Representatives of the entertainment industry had organised a protest against COVID-19 restrictions, which include an 8 p.m. curfew for restaurants, bars and clubs.

Approximately 35,000 people protested in Vienna on Saturday, with police noting that several protesters had been detained.

Austrian authorities restricted people’s movement to shopping for essentials, going to work and exercising, stating that the measures would remain in effect for at least 20 days. They also announced that effective February next year, COVID-19 vaccination will be mandatory throughout the country.

In Belfast, several hundred turned out to protest the vaccine passes the government of Northern Ireland intends to introduce on 13 December for restaurants, bars and nightclubs.

In Rome, some 3,000 people protested against the vaccine passes that are required to work, travel and access to social life.

About 1,000 protesters marched in Denmark against the government’s plan to reintroduce vaccine passes for civil servants.

French Interior Minister Gérald Darmanin announced plans to send about 50 counter-terrorism and tactical forces agents there. He pointed out that some people involved in the unrest had shot at police officers and he pledged to mount a “firm” response, BBC reported.

Thousands protested against new restrictions in the Croatian capital of Zagreb as the government announced the introduction of mandatory COVID-19 vaccination for the public sector.

Roughly 10,000 protesters marched against new restrictions in Australia, with rallies being held in major cities.