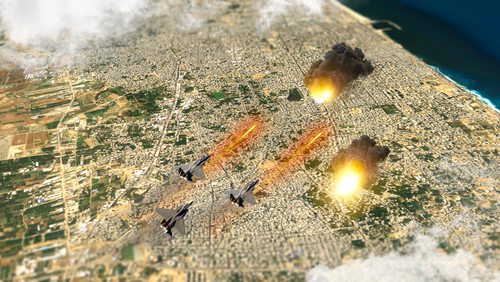 Israel’s Prime Minister Benjamin Netanyahu implied that the bombardments would continue “at full force” and “as long as necessary in order to return calm and security to all Israeli citizens”. His statement came on Sunday as the UN Security Council was holding an emergency meeting on the situation.

More intense strikes were launched throughout the weekend and Monday, targeting infrastructure and underground tunnels that Hamas purportedly uses to support its military operations. After a week of massive destruction and a rising death toll, the Israeli military fired artillery shells into south Lebanon for the first time, against Palestinian militants – and not the militant group Hezbollah – who had allegedly attempted to fire rockets into Israel. The UN peacekeeping mission in southern Lebanon tweeted that it had intensified patrols in the area and that the situation on Tuesday morning was calm, the New York Times reported.

At least 200 Palestinians, including 59 children, have died in the Gaza strip according to officials. Approximately 40,000 people have been displaced so far after the destruction of their homes.

Indiscriminate bombings have caused complete or extended damage to hospitals, medical facilities and infrastructure, making it almost impossible to provide first aid to victims of the air raids and maintain COVID-19 testing and vaccination. Already in a dire situation since the blockade that began in 2007, Gaza’s hospitals face immense difficulties in accessing medicines, equipment and fuel. Despite this, Israel blames Hamas for the shortages.

Sacha Bootsma, head of the World Health Organisation (WHO) office in Gaza, along with humanitarian organisations, has warned of a humanitarian catastrophe. “Every day we see more deaths, destruction and severely injured people. Worse of all, the destruction of basic infrastructure is impeding access to healthcare facilities for the severely injured”, she told France24.

The MSF operation  in Gaza declared that Saturday’s bombardments had widespread horror and had damaged an MSF clinic which provides trauma and burn treatment. “The clinic is now closed, not just because of the damage to its structure but also because the road to access it has been destroyed and the area is still unsafe”. “The horrendous attacks on civilians and civilian infrastructure that we are witnessing in Gaza are inexcusable and intolerable”, said Ely Sok, Head of MSF in the occupied Palestinian territories.

The Qatari Red Crescent also condemned an Israeli strike against its Gaza office as a flagrant violation of the Geneva Convention. “The Qatar Red Crescent condemns the targeting of its headquarters in Gaza [and] reaffirms the need to allow relief teams to work in accordance with international humanitarian law”, it tweeted.

The flattening of the al-Jalaa tower where Associated Press and Al Jazeera maintained offices drew widespread condemnation. The action further hinders the flow of information on developments on the ground.

Associated Press President and CEO Gary Pruitt has requested an independent inquiry into the destruction of the tower, saying the public needs to know the facts. Media watchdog Reporters Without Borders (RSF) has called on the International Criminal Court to investigate the bombing as a possible war crime. In a letter to the court’s chief prosecutor, RSF said that the offices of 23 international and local media organizations had been destroyed over the past six days and that there was strong reason to believe that the Israeli military’s “intentional targeting of media organizations and intentional destruction of their equipment” was in violation of one of the court’s statutes. It said the attacks serve “to reduce, if not neutralize, the media’s capacity to inform the public”.

US Secretary of State, Antony Blinken, said he had yet to see any evidence supporting Israel’s claim that Hamas operated in the al-Jalaa tower building, noting that he had pressed Israel for justification.

Both AP and Al Jazeera have been able to air live programmes from Gaza, as the AFP has offered to share its offices with those affected by the airstrikes.

US President Joe Biden expressed his support for a ceasefire in a telephone call with Netanyahu, but stopped short of demanding an immediate end to hostilities. The White House statement vaguely referred to “engagement with Egypt and other partners towards that end” and added that the President “encouraged Israel to make every effort to ensure the protection of innocent civilians” and “reiterated his firm support for Israel’s right to defend itself against indiscriminate rocket attacks”. It further added that the two leaders “discussed progress in Israel’s military operations against Hamas and other terrorist groups in Gaza”, Reuters reported.

American University of Beirut researcher Rami Khouri described Biden’s call for a ceasefire as being about “as low intensity as it gets”. Speaking to Al Jazeera, he said: “There’s nothing really more limp than that in terms of putting oomph behind your desire for a ceasefire – so it’s not very serious”.

France’s President Emmanuel Macron met with Egypt’s President Abd al-Fattah al-Sisi on the sidelines of a Paris conference on African aid. The two agreed it was “absolutely necessary” to end the hostilities and shared their “deep worry about the ongoing escalation of violence and the many civilian victims”, according to a French presidency statement.

Since the mediating efforts are being led by Egypt, Jordan and Qatar, in coordination with France and Germany, today’s meeting of EU Foreign Affairs ministers, follows days of silence and the absence of any common statement or united position by the bloc. Once again, the EU appears marginalised on the diplomatic front, leaving Hugh Lovatt, a Middle East specialist at the European Council on Foreign Relations, to claim that today’s meeting “may be as much about being seen to be involved as practical achievement”, according to a Guardian report.