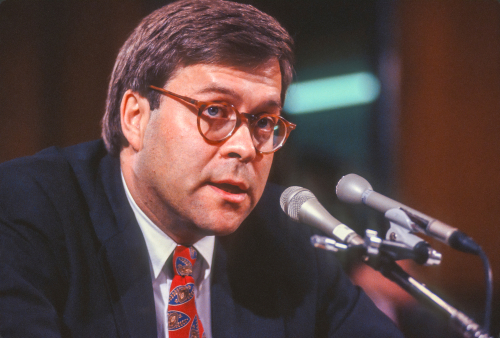 New York (Brussels Morning) During the early months of his presidency, when Donald Trump was beginning to realise the legal trouble that was closing in around him he is said to have asked “where is my Roy Cohn.”

Cohn was the one time henchman of red-baiting Senator Joe McCarthy during the height of McCarthyism. Cohn, who was known for his viciousness, dishonesty and willingness to do anything to win, went on to have a long career as a lawyer and fixer for numerous politicians and businesspeople including Donald Trump.

In 2018 Trump finally found his Roy Cohn, albeit something of a bloated goyishe knockoff of the original, in the person of William Barr. Barr, who Trump nominated to be Attorney General in late 2018 and was confirmed by the Senate in early 2019, was unusual among the members of Trump’s inner political circle and most trusted enablers in that he had impressive legal, professional and educational credentials.

Barr was a member in very good standing of the Republican establishment and conservative legal circles. He had worked for both President Reagan and George H. W. Bush, even serving as the latter’s Attorney General. In that regard, Barr differed from Jared Kushner, Steve Bannon, Sarah Huckabee Sanders, Mike Lindell, Kellyanne Conway and the other third tier operatives and fringe rightwingers that constituted most of the former president’s inner circle.

Barr traded on his credentials and legal acumen to become a particularly effective defender and apologist for Trump. He is mostly remembered for the deeply disingenuous letter he wrote that falsely claimed that the Mueller report had found no evidence that the Trump campaign had any unsavoury relationship with the Kremlin. However, Barr did much more than that. He helped Trump obstruct justice at every turn, advocated for almost no limits on presidential power and helped Trump treat the Department of Justice like his personal law firm.

It was not until after the November 2020 election that Barr finally expressed any criticism of Trump. Barr’s refusal to go along with the big lie that Joseph Biden had somehow stolen the election was a blow to Trump who had undoubtedly been counting on his Roy Cohn to support that fantasy. However, in the bigger picture it was very much a day late and a dollar short on Barr’s part.

By the time Barr stated that he had seen no evidence of significant election fraud, it was already apparent not only that Biden had won fairly but that Trump’s claims were not believed anywhere outside of the Trump cult. Perhaps Barr deserves credit for not following Trump to the bitter and pathetic end, but his actions are better understood as those of a very highly credentialed rat leaving a sinking ship.

Recently, Barr has begun an effort to rehabilitate himself and his reputation. He has done this largely by trying to distance himself from some of the worst aspects of the Trump administration while presenting himself as having been the adult urging caution in the last weeks and months of Trump’s presidency.

In doing this, Barr appears to be trying to reclaim his position as part of the legal and professional elite rather than being seen as a key architect in an attempted authoritarian coup. He is asking the American people to give him an enormous amount of credit for meeting the extremely low bar of not being part of an effort to steal an election while simultaneously asking us to ignore everything else he did to facilitate Trump’s authoritarian ambitions for almost two years.

Barr should not be allowed to even partially succeed in this endeavour or to come anywhere close to even smelling respectability again. Barr’s efforts are not just self-serving but are also implicitly an attempt to rewrite the history of the last few years.

Allowing Barr to be seen as somehow trying to stop Trump’s authoritarian tendencies – which began well before November of 2020 – brings us closer to an understanding of the Trump years as an aberration that were the product of the Trump family and a few particularly sleazy people around them. That is not what happened during the Trump presidency. Rather, virtually the entire Republican Party leadership including consummate insiders and institutionalists – a vague term that is supposed to indicate gravitas and seriousness – made the Trump regime possible.

Attorney General William Barr was the ultimate symbol of the depths of GOP complicity. If he is rehabilitated, then the entire GOP leadership will be able to begin to distance themselves from the worst excesses of the Trump era.

On the other hand, if Barr is held accountable for what he did to help sow discord, weaken American democracy and undermine the rule of law, it will be a reminder that history does not give anybody a pass just because they went to the right schools, have the right credentials or can talk a good game about institutions and rule of law.