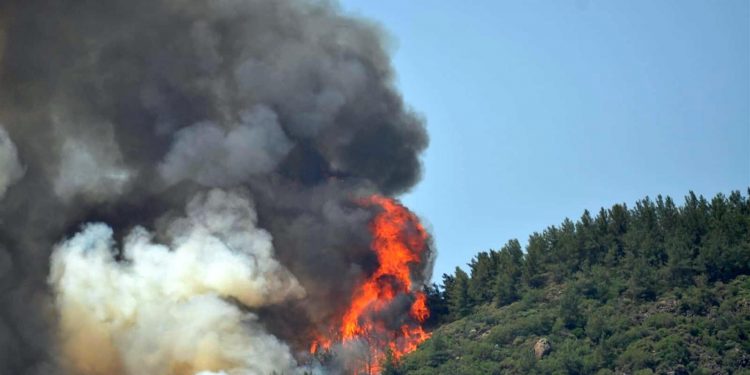 Brussels (Brussels Morning) Wildfires broke out in Italy, France and Spain on Saturday. Italian officials described the wildfire on Sardinia as “an unprecedented disaster.”

Athorities evacuated close to 1,500 people across Sardinia and noted that wildfires consumed thousands of hectares of vegetation, DW reported on Sunday.

The President of Sardinia, Christian Solinas, warned that the wildfire destroyed more than 20,000 hectares of vegetation, destroyed several houses and killed animals, but noted that no human injuries or deaths had been reported.

According to officials, roughly 7,500 emergency workers are helping with evacuation efforts. The threat is still rated as extreme and authorities are calling on residents to stay vigilant until the wildfire is brought under control.

Paolo Pireddu, Mayor of the Villaurbana municipality in Oristano province in the west of Sardinia, noted that authorities “put the population on alert with the possibility of evacuating, should there be a need”.

It was not possible to estimate the damage caused by the fires still raging in the province, he said. He described the situation as “an unprecedented disaster” and noted that “we are asking the government for immediate economic support to repair the damage and help affected communities get back on their feet”.

Greece and France dispatched two firefighting planes each to Italy. European Commissioner for Crisis Management, Janez Lenarčič, thanked them for their “prompt solidarity”.

He pointed out that the Emergency Response Coordination Centre (ERCC) “remains in close contact with the Italian authorities to monitor developments on the ground and coordinate any further assistance as needed”.

Wildfires that broke out in Spain on Saturday destroyed more than 1,600 hectares of woodland some 100 kilometres west of Barcelona. About 40 people were evacuated from a nearby summer camp and 168 from their homes in Conca de Barberà and Anoia counties, according tMonday’s edition of El País.

An estimated 300 emergency responders prevented the wildfire from reaching inhabited areas on Sunday.

Also on Saturday, a wildfire broke out in the south of France, with more than 1,000 emergency responders deployed and a firefighting aircraft dispatched.