Who won what from the Armenian-Azeri ceasefire 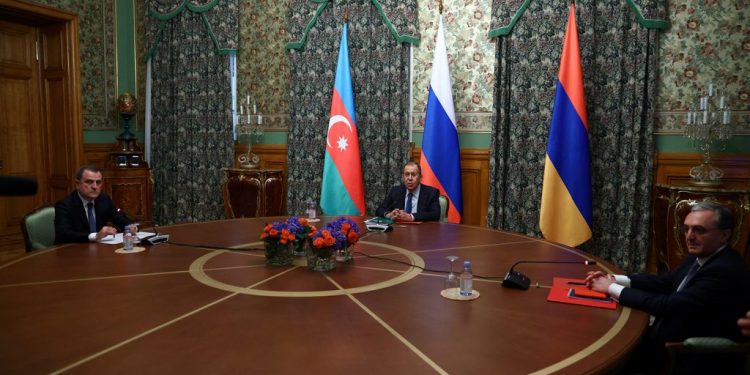 Istanbul (Brussels Morning). Following Russian mediation, Armenia and Azerbaijan reached an agreement that entails a ceasefire, a prisoners` exchange, as well as the exchange of bodies of those killed in the conflict.

The agreement went into effect on Saturday, 10 October 10 at 12.00. Given the humanitarian scope of this agreement, the parties agreed to comply with mediation terms set by the International Committee of the Red Cross.

The two parties are committed to continue the negotiations under the mediation of the Co-chairs of the Minsk Group of the OSCE.

On behalf of Brussels Morning, Ambassador Jeopardize reached out to Matthew Bryza, former US Deputy Assistant Secretary of State for European and Eurasian Affairs (2005). Ambassador Bryza has long experience in the Caucasus, having led peace mediation efforts in Nagorno-Karabakh, Abkhazia and South Ossetia.

Ambassador Matthew Bryza (MB).Russian President Putin appears to have pressured Azerbaijan to stop its military offensive, which was gaining ground and causing desperation in Armenia.

By doing so, Putin is living up to Armenia’s expectations of support from its treaty ally under the Collective Security Treaty Organization, but without involving Russia directly in the fighting. After all, the fighting has occurred on the territory of Azerbaijan rather than that of Armenia and is thus beyond Russia’s treaty obligations to Armenia.

TJ. If that is the case, what happens now in Azerbaijan?

But President Putin was never going to permit such a total victory by Azerbaijan, since this would result in a Baku too difficult for Moscow to manage, while imposing political costs on Putin for “abandoning Armenia”. Ultimately, Putin’s goal is to “keep the pot stirred, but not let it to boil over.”

Moreover, while Azerbaijan made relatively quick military gains in the flatter eastern terrain of the Fizuli and Jabrayil districts, the fighting was growing more difficult and, therefore, riskier for Azerbaijan, in the hillier areas.

TJ. So, is this a one-sided ceasefire agreement that favours Armenia?

MB. No, the other terms of the ceasefire agreement are advantageous to Azerbaijan.

First, it resolves a growing humanitarian problem for Azerbaijan of how to arrange proper treatment for Armenian prisoners of war.

Second, by agreeing to resume negotiations for a peaceful regulation of the conflict under the OSCE’s Minsk Group and on the basis of the “Basic Principles,” without any change in the format of the talks, Azerbaijan has gained a number of concessions.

The Armenian Prime Minister Pashinyan was forced to repudiate statements that torpedoed the negotiating process. Until recently, the Armenian prime minister appeared to be abandoning the “lands for peace” approach, which always governed peace negotiations, by opting for a “new wars for new lands” approach. He also seems to have moved away from a “Nagorno Karabakh is Armenia” position to the “Nagorno Karabakh is independent” position.

In sum, Armenia demanded the reframing of negotiations to include representatives of the unrecognized “Nagorno Karabakh Republic,” which means that Baku would have to recognize Nagorno Karabakh’s independence at the outset of the negotiations. That was never likely to be accepted by either Azerbaijan or any other international stakeholder.

Prime Minister Pashinyan’s repudiation of these previous statements are a political liability for him and will have a severe political cost in Armenia. For the Azeri President, the political objective will be to explain these gains.

TJ. Will the ceasefire hold, given that it is politically costly for both sides?

MB. As is often the case, this ceasefire appears to have been violated at this early state. But the leaders of Azerbaijan and Armenia know they will face a range of negative consequences if they defy the meditation of Russia’s President Putin. Whether this need, however acutely felt it may be by the leaders of Azerbaijan and Armenia, will outweigh the pressure of their respective domestic public opinions remains to be seen.