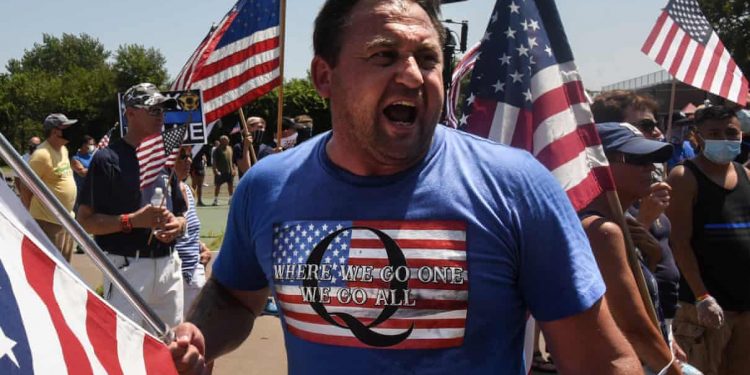 Donald Trump does not know what QAnon is, chief of staff Mark Meadows told Fox News Sunday – despite the president having tacitly endorsed it in the White House briefing room this week.

The conspiracy theory – which holds that Trump is fighting a group of “global elites” engaged in human trafficking, pedophilia and the harvesting of a supposedly life-extending chemical from the blood of children – has been identified by the FBI as a potential domestic terrorist threat.

Nonetheless, Republican candidates for US Senate and the House have expressed sympathy with and support for QAnon and on Wednesday, during a press conference at the White House, Trump praised its followers.

“I don’t know much about the movement other than I understand they like me very much, which I appreciate,” he said.

It was the president’s first public comment about QAnon, though he has retweeted accounts which promote it.

A reporter pointed out that QAnon followers believe Trump is “secretly saving the world from this satanic cult of pedophiles and cannibals”.

The president replied: “I haven’t heard that but is that supposed to be a good thing or a bad thing?”

“If I can help save the world from problems, I’m willing to do it,” he said.

Hours before, Facebook announced it had taken down or restricted more than 10,000 groups, pages and Instagram accounts associated with the rightwing conspiracy theory.

Asked on Fox News Sunday if the president condemned the group, Meadows said: “We don’t even know what it is.”

Meadows told ABC’s This Week, meanwhile, that he had to “Google” QAnon to figure out what it was. It was not a “top 20 priority” for the White House, he said.

“You know when we look at that – there are a number of conspiracies that we ought to be talking about,” Meadows said.

“We ought to be talking about the fact that we continue to look at why the FBI spied on the Trump campaign and what happened there. That was a conspiracy that was real and one we started to look at.”

Most observers agree the claim that the FBI and the Obama administration spied on the Trump campaign in 2016, enthusiastically propagated by the president, is not true.

“If you look at the top 20 priority,” Meadows said, “QAnon’s not on it. It’s probably not on the top 50. It’s time that we get serious about questions and move on. I don’t see that this is a central debate that anybody’s going to decide who the next president of the United States might be or where we need to deploy the FBI.”

This week, Marjorie Taylor Greene, a QAnon follower, won the Republican primary for a House seat in Georgia. Her win, coupled with the president’s comments, prompted some Republicans to disavow the conspiracy theory.

Representative Liz Cheney of Wyoming called QAnon “dangerous lunacy that should have no place in American politics”.

Sasse told the Washington Post: “If Democrats take the Senate, blow up the filibuster and pack the supreme court – garbage like this will be a big part of why they won.”

Asked about Taylor Greene, House minority leader Kevin McCarthy said of QAnon: “I do not agree with their beliefs at all.”