When democracy is contested 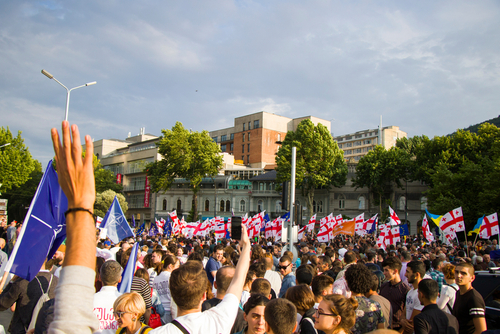 TBILISI, GEORGIA - JUN 29, 2019: Georgian protests in front of the Parliament of Georgia, also known as Gavrilov's Night or anti-government protests in the country of Georgia. Tbilisi, Georgia.

In the early 1990s democratisation and liberalisation were regarded as parts of an indivisible and uncontested political project, sponsored by the only remaining superpowers. The question is how much the changing nature of national and world politics – from Georgia to Myanmar – can erode this conviction.

Washington, D.C. (Brussels Morning) The US-Georgian relationship was foundational to the Georgian Republic and its institutions. As the young Republic was taking its first steps towards independence, American assistance pushed forward the projects of democratisation and liberalisation in Georgia. However, the context of democratisation is changing: the project is neither inevitable nor uncontested. Moving towards democratic consolidation is no longer assumed to be an irreversible path.

Georgia has failed to create a democracy in which winner does not take all: the opposition cannot hold the government to account and the government cannot represent all the electorate. “The people” appears to be divided in “winders” and “losers” with little policy negotiation. The recent arrest of the opposition leader, Nika Melia, reflects more a clash of personalities than a substantive policy debate.

Seeking some substance in this unsubstantial stalemate, Brussels Morning sits with Ambassador Kent Brown, the first US Ambassador to Georgia (1992-1995). We ask the question ‘what happens when democracy as such is no longer regarded as an uncontested project.’

Ambassador Tedo Japaridze. You were the first Ambassador of the USin Georgia. A recent op-ed by a Voice of America correspondent in Washington Post lamented the loss of influence of the United States in Georgian democracy. Do you think that the arrest of an opposition leader is the end of the road for Georgia’s Western trajectory?

Ambassador Kent Brown. Since I’m in neither Washington nor Tbilisi right now, I find it difficult to react to that VOA correspondent’s remarks. I would not in any case say there has been a loss of US (or other Western) influence over Georgian political developments.

Georgian citizens and their leaders are responsible for their own destinies. I am sure that US, EU and supportive powers behind Georgia will continue to contribute to the country’s deep appreciation for and commitment to democracy.

TJ. For some time, perhaps longer than five years, the West appears to be reacting rather than leading the foreign policy narrative in the Black Sea. Do you feel that democratic states continue to share a sense of common purpose? Is democracy on the back foot?

KB. The Black Sea is a crucial part of all countries’ calculations of their strategic interests.  There has been and will continue to be competition for influence in the region, and coalitions of states and organizations have Black Sea issues on their agendas and coordinate their approaches. One example is fighting crime and corruption in littoral states which can do damage to economies in distant lands.  More generally, promoting democracy around the Black Sea, and beyond, remains a fundamental part of US and EU policies. To be sure there may be occasional disruptions, but most countries remain committed to encouraging democratic institutions and policies.

TJ. A decade following the Arab Spring and a generation after the emergence of new states in Eastern Europe, what is the verdict: can democracy be exported?

KB. Ι would caution against anyone thinking that democratic practices and attitudes can be easily exported. Ideally, democracy should spring from the roots of the population. What should and can be exported is the inspiration to the people, and their leaders, to respect inter alia the principle of the Rule of Law and the advantage of diversity of political opinions. The Georgian public specifically had some early advantages in terms of an egalitarian approach to human relations, and a commitment to independence. The challenges included the rapid disintegration of Soviet institutions and economic relations between the Republics.  This meant that Georgia had to start from scratch to build democracy in an environment where significant power rested in the hands of illegitimate actors.  The US and other Western powers did not try to dictate the conditions needed, but sought to subtly inspire them.

TJ. We have had a technological revolution in political campaigning, with people targeted in their thousands for the psychological composition, besides their demographic outlook, cultural values, and class consciousness. Given recent US experiences, do you feel that the challenge to democracy is of a technical nature or is inequality a bigger challenge than we believed?

KB. The application of new technology, especially the means and methods of broadcasting information and opinions to the general public, and to specific groups, has benefits and serious risks. Ideally, the public is exposed to a variety of perspectives and encouraged to be sceptical of the messages received. Specially targeted audiences may be picked because they are susceptible to one-sided advocacy. The audience in a democratic environment should have increased awareness of the fact that views disseminated via new technologies are not always designed to enlighten, but often are promoted as part of an ideological struggle or the fostering of the interests of special actors and groups.

TJ. Did Eastern Europe ever get a plan with the intent and purpose of a Marshall Plan? When did the West lose the chance to transform Russia? Was it delusional that the country could be reformed or was there an issue with the blueprints for reform?

KB. At least three things would have been on the table for the American policy makers when World War II ended = exhaustion from war, the threat of instability and anti-democratic movements in Europe, and a focus on the USSR.  Many experts thought that any improvement in the prospect for democracy in Europe needed to “fix” the Soviet approach, and hoped the Marshall Plan could be made attractive to Moscow.

But realists in the US and Western Europe were very skeptical and in the end Stalin and co. viewed the Marshall plan as a threat and insisted that the Eastern European satellites not participate. I believe there was no chance to fundamentally change Stalin’s USSR, and one element of US policy was to encourage Eastern European governments, and even the non-Russian Soviet republics, to pursue more independent domestic and foreign policies. Could there have been opportunities to encourage various transformations after Stalin?  Most of the changes that did come about were the result of political domestic calculations of Soviet and Eastern European domestic leaders.

TJ. China and Russia are stealing the western thunder of “soft diplomacy” during the pandemic. Every Georgian recalls that the first shipment of grain in our country was American. Do you feel that lost ground in emerging economies can still be covered by Europe and the United States?

KB. China and Russia have recognized that “soft diplomacy” is an excellent tool for increasing their global influence.  The fact that these policies have evolved reflects a perception that the US, Japan and Western Europe are not particularly interested in doing all they might do to strengthen their own influence in key regions (such as the Balkans of Southeast Asia) through non-military means, including trade. Even more importantly, Moscow in particular saw how Western soft power policies had played an important role in encouraging non-Russian former republics (like Georgia and the wheat shipments) to strengthen their independence, and decided that soft power could reap relatively inexpensive benefits.

Expectations in the West tend to be that soft power will have long-term benefits, but don’t have rapid results. The current situation in Myanmar presents the West with a dilemma of how to respond to the coup – how to encourage a return to more democratic policies and respect for human rights without inspiring the Rangoon military junta to become more dependent on China, and Russia, for their own survival. Realpolitik, in my view, suggests that it is more important to discourage, or not encourage, closer Rangoon-Beijing relations, than to try to loosen the junta’s monopoly of domestic power. But who besides the Chinese have the long-term vision and patience to cultivate an effective soft power policy that is long-lasting anywhere?