What works when everything fails in European diplomacy 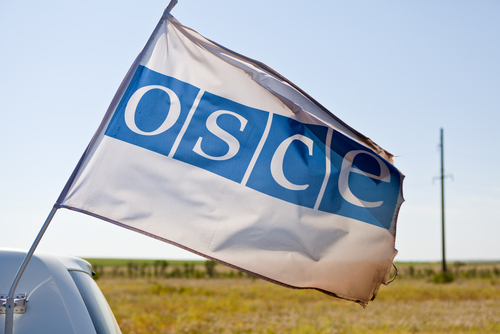 Tedo Japaridze speaks to Roberto Montella the General Secretary of the Parliamentary Assembly (PA) of the Organisation for Security Cooperation in Europe, on the crisis of European multilateralism

Washington, D.C. (Brussels Morning) It is said that the system of collective security for the “common European home” is now under strain.

On the one hand, there is a widening gulf with Russia: war in the Caucasus, the annexation of Crimea, and allegations of interference in electoral processes; on the other, traditional allies have been growing apart: Brexit and relations between Ankara, Washington and Brussels are key examples.

There are indications that European security is becoming more “plurinational” – smaller alliances between states – rather than multilateral. But one of Europe’s diplomatic “foldback positions” is the Organisation for Security Cooperation in Europe. Its mandate is the “bread-and-butter” or technical aspects of conflict prevention: confidence-building, conflict management, monitoring, and upholding of a human rights benchmark. The 57 members of the Vienna-based organisation include EU member states, Russia, Canada, the UK and the US, and continues to operate when, literally, everything else fails.

To understand what works whenever everything fails, Brussels Morning speaks to Roberto Montella, of the OSCE – PA since 2016, currently in his second five-year mandate. Montella has held positions at OSCE in Bosnia and Herzegovina, Kosovo, Serbia, Serbia, and Montenegro. A former policy officer at the Italian Senate, he has also served as a coordinator of Long-Term Election Observers for The Carter Center for the Middle East. It is fair to say, he is a servant of peace.

Ambassador Tedo Japaridze (TJ). You have served the Organisation for Security Cooperation in Europe (OSCE) in various posts in the Balkans. As the momentum for EU enlargement in the region is waning, do you feel there are more threats to regional security?

Secretary General Roberto Montella (RM). Certainly, the EU enlargement process as such has been a significant unifying factor for all countries in South East Europe over the last two decades. Its current stalemate, without any tangible advancement perspective, is creating broad disillusionment and some sort of understandable disenfranchisement towards the EU. On the one hand, the disengagement of a big power can potentially evoke underlying threats. On the other hand, South East Europe as a region in its entirety has taken ample ownership of the efforts towards EU accession and has maturely grown out of old dynamics that characterised the 1990s, many of which were the catalysts leading to conflicts. The equilibrium remains in some cases fragile — see the Belgrade-Pristina dialogue — but there are also very good signs that regional cooperation can function well autonomously, and we have seen this, for instance, concerning COVID-19.

The priority must remain a focus on good governance and rule of law at national levels and regional stability. This is precisely why it is important to nurture our own engagement in South East Europe. By this I am of course referring to the OSCE’s role in the region, which has shaped the recent history and activities of the organisation. Our six field operations in the region have consistently been at the forefront of the international community’s efforts in promoting and supporting post-conflict reconciliation and reforms that coincide with the EU’s enlargement reform agenda.

In evaluating the impact of OSCE’s engagement in the region, one should note the significance of Albania’s successful chairing of the OSCE in 2020, which was clearly a testament of the OSCE’s success in promoting lasting, positive development in the region. Of course, challenges remain in South East Europe, most notably related to democratisation processes, the consolidation of democratic and independent institutions, the promotion of viable and mutually beneficial interethnic relations as well as the conceptualisation of adequate social policies.

Effectively and successfully addressing these outstanding challenges will inevitably require the continued engagement of OSCE’s Field Operations and specialized Institutions, including our Parliamentary Assembly, which is why receiving robust political mandates and the necessary financial resources to respond appropriately. The chairmanship of North Macedonia in 2023 will hopefully go some way to maintaining regional momentum for the EU accession process.

TJ. During your tenure as Secretary-General of the OSCE PA – since 2016 – Europe is gradually moving away from a decidedly collective security arrangements towards a plethora of “plurinational” regional arrangements: Turkey plays a new role in the Caucasus, France in the Mediterranean. Do you feel we are dealing with a “systemic crisis” or a temporary “diplomatic recession”?

RM. New challenges have emerged, at times pushing States into survival mode, regrettably at the expense of goodwilled multilateral engagement. Consequently, the gap between international cooperation based on agreed rules and principles and global connectivity has widened. That is to say that we now live in an unprecedentedly interconnected world, albeit characterised by inward looking policies and mutual distrust. This is a contradiction in itself and a challenge that an assembly like ours is called to reverse.

To address specifically your question: it is difficult to label and assess a period in time that lies not yet in the past but in the present. I believe that the “diplomatic recessions” we witness could be the litmus test of a systemic evolution – but I wouldn’t necessarily use the word “crisis”.

But multilateral cooperation – the tool to manage this system – is in real crisis. We are increasingly facing challenges of a global nature, most notably climate change, the COVID-19 pandemic, and newly emerging transnational threats.

I am under the impression that the international system is struggling to find the right format to respond to these challenges, as it is based on a structure not taking into account real needs, current power relations between states, including the economic and cultural assets of emerging powers, and instead focuses too much on merely asserting status quo principles. This leads to mistrust, inflames nationalism, and incapacitates dialogue, disrupting international cooperation precisely when we need more of it.

That is why, to directly quote your question, we are witnessing “a plethora of plurinational regional arrangements”, as too many actors do not manage to make themselves effectively heard in wider collective security arrangements. And whilst the reform of international bodies aims at ehancing effectiveness, only a genuine belief in cooperation and diplomacy – comprising of mutual understanding and compromise – can bring about real results.

TJ. For over 20 years we have the proliferation of non-state regimes across the region, I would refer to as “Eastern Partnership” or “New Eastern Europe” and Russians would refer to as “the Near Abroad”. Are these a sum of “national security challenges” or a challenge to European security at large?

RM. National strategic interests should not prevail at the expense of internationally agreed norms and principles, as this approach directly cripples the infrastructure for multilateral good faith cooperation in the world collective interest.

However, perceptions also play a decisive role and whenever they diverge, these should be worked upon, instead of being instantly dismissed. This is precisely what our Parliamentary Assembly aims to do in its efforts to build bridges, identify common ground across the vast array of national strategic interests by essentially offering its unique platform to add confidence into its “regional chessboard”. Also, it should not be discarded that democracy-building processes cannot all advance at the same speed, for obvious reasons. “Quick fixes” have clearly displayed limits of democratization processes, which outright ignore national, regional and local specificities.

Each phenomenon is, per se, different and should be contextualised in its socio-political and geo-political framework. However, there are surely detectable patterns. I would say the answer is in-between: while they are indeed national phenomena, the very fact that there are several in the same region, involving the same actors, presents an overall challenge of instability in the region.

But this brings me to the previous question and to the broader crisis of international cooperation. Diplomacy is crucial, especially when threats to peace and security are high. You are Georgian, and I imagine that with this question you may wish to refer to Abkhazia and South Ossetia. International law, for its very essence, is difficult to enforce. When multilateral fora address such matters – as in the Geneva International Discussions and IPRMs – the result is often a stalemate. Yet, it is crucial to sit around a table and never give up on dialogue, simply because people around the globe continue to suffer.

TJ. There is a proliferation of security challenges that cannot be clearly defined as a “national security” or “home affairs” threat: organised crime, small arms smuggling, trade-in chemical and biological agents. Would you say that despite its political fragmentation Europe is overall as safe as it was two decades ago?

As I’ve mentioned before, the challenges and threats we face are increasingly of global nature, and oftentimes we consider and address them only with a national security perspective. No effective response to such threats can come unilaterally.

But I would caution against too much negativity: even if the divide among European countries is wider and political fragmentation is at its peak, cooperation at working levels on issues such as those you mention in your question remains very effective and has significantly evolved over the last two decades.

It is important to take stock of what we have achieved and emphasise success, highlighting the benefits of cooperation and aim for more. Europe is safe. However, safety is fragile and a constant work in process — the only way to maintain it is engaging in good faith cooperation, with the understanding that with joint responsibility we will ultimately all be better off.