What the Debate Told Us About Governance 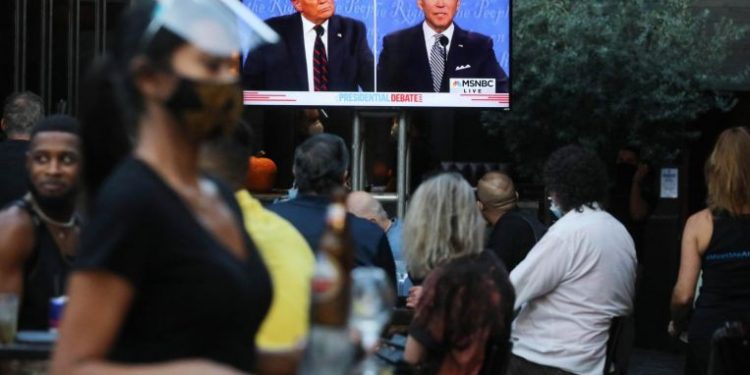 “That contrast demonstrates the two candidate’s different understanding of governance and therefore, of what the job of president is.”

Thursday night’s debate, mercifully the last in this presidential election, revealed two very different understandings of and approaches to governance. Moreover, it highlighted how Donald Trump’s failure regarding the Coronavirus pandemic was, among other things, an extraordinary failure of governance.

Appropriately, the first question of the debate was about the pandemic. Joe Biden’s response was not exactly inspiring, but it focused on using government resources and programs to solve the problem, “make sure we have everyone encouraged to wear a mask all the time.

I would make sure we move into the direction of rapid testing, investing in rapid testing. I would make sure that we set up national standards as to how to open up schools and open up businesses so they can be safe and give them the wherewithal, the financial resources to be able to do that.”

Trump’s response was odd not just in its substance, which seemed to stress that it could have been worse, which is both true and wildly insensitive, but more significantly because it again demonstrated how unfamiliar Trump is with governance.

He mentioned states where it had spiked, his own recovery from the disease and how the problem is worldwide. There was some mention of how the administration has distributed masks, ventilators and, oddly, goggles, but no proposals, plans, applications of government resources to the problem or proposed legislation.

That contrast demonstrates the two candidate’s different understanding of governance and therefore, of what the job of president is. Biden seems, perhaps based on his long experience in government, to have a very governance focused understanding of the presidency. We saw this throughout the debate. Biden referred to “using the Defense Act”, which would have accelerated production of needed supplies early in the pandemic, but Trump never did that.

Biden also argued that Trump “should have been negotiating with Nancy Pelosi and the rest of the Democrats and Republicans” to get needed assistance to the people. This reflects understanding of the presidency as being about passing laws and working with congress.

When the discussion switched to foreign policy Biden said he wanted to make China “play by the international rules.” This is also a conventional governance based approach to policy. It is also a reminder that Biden’s approach to foreign policy is so firmly entrenched in establishment thinking that it often feels tiresome and a triumph of conventional thinking over innovation. Donald Trump pointed this out during the debate referring to Biden as “just a typical politician” and then elucidating the obvious by saying “I’m not a typical politician.”

Indeed, Trump is not a typical politician. While this undoubtedly was a key ingredient in his victory in 2016, his inability to pivot even a little and take on some of the hard work of governance since becoming president has not helped him. This is partially due to Trump’s uncanny ability to see absolutely everything as being about himself.

This flawed perspective has limited Trump’s understanding of the presidency. The president is in charge of a huge, powerful, sprawling, complex and sometimes slow-moving government. There are a great deal of government resources for a president who knows how to use the, but Trump has never been that kind of president.

For Trump, the presidency is simply the man who holds the office. This was evident in the debate as Trump presented almost all of his administration’s accomplishments in deeply personal terms, blissfully unaware of how much more he could have done if he had been interested in understanding the government structures which he leads.

Trump’s surreal statement “with the exception of Abraham Lincoln, possible exception, but the exception of Abraham Lincoln, nobody has done what I’ve done…I gave them (Historically Black Colleges and Universities) more money than they asked for because I said, ‘I think you need more.’ And I said, ‘The only bad part about this is I may never see you again.’ Because I got very friendly with them and they like me and I like them. But I saved Historically Black Colleges and Universities.” Trump’s portrayal himself as a latter day Martin Luther King Jr. was absurd given that only a few weeks ago, during a nationally televised debate, Trump told white supremist groups to “stand back and stand by.”

However, this also captures the extent to which Trump sees the presidency about what he says and does and little else. Trump offered no plans to create programs to help America combat racism. Rather, he pointed to some people of color, significantly in very vague terms, who he had helped. This was the presidential equivalent of saying “Some of my best friends are Black.”

Trump’s response to a question about climate change again revealed a bedrock myopia that precludes Trump from fully understanding what it is the president does. “I do love the environment, but what I want is that cleanest crystal clear water, the cleanest air…And we have the best carbon emission numbers that we’ve had in 35 years under this administration, we are working so well with industry, but here’s what we can’t do.

Look at China, how filthy it is, look at Russia, look at India, it’s filthy, the air is filthy.” This Trumpian word salad is not so easy to understand but it boils down to Trump saying he likes the environment and that he works well with industry, but nothing about governance, laws, budgets or anything like that.

Joe Biden and Donald Trump have sharply differing views on issues ranging from healthcare to the environment and from taxation to foreign policy. We saw that in the debate and throughout the campaign.

However, the debate was also a reminder that Biden has a conventional, for better or for worse, view of the how the president should govern, whereas for Trump the president’s job still seems to be about making pronouncements, kibitzing and how it makes Donald Trump feel.