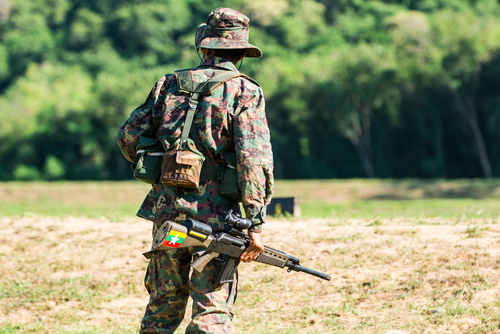 Brussels (Brussels Morning) Western diplomats in Myanmar warned the military junta not to use violence against protesters and civilians as security forces were deployed in several cities on Sunday, according to DW reporting.

Diplomats the EU as well as from Canada, the UK and 11 other nations issued a statement denouncing the arrests of politicians following the 1 February coup. “We support the people of Myanmar in their quest for democracy, freedom, peace and prosperity,” the statement said, adding that “the world is watching.”

“It’s as if the generals have declared war on the people of Myanmar”, Tom Andrews, the UN special rapporteur for Myanmar, said, making clear that they would be held accountable.

The US embassy in Myanmar called on American citizens there to shelter in place, advising that “there are indications of military movements in Yangon and the possibility of telecommunications interruptions overnight between 1 a.m. and 9 a.m.”

Security forces were deployed to several cities as the anti-coup protests continued on Sunday with tens of thousands participating.

Protesters gathered at the US embassy in Yangon for the second consecutive day in a show of support for the sanctions that have been announced against the coup leaders. A workers’ strike has paralysed the country.

Netblocks, an internet freedom watchdog, reports “a near-total internet shutdown is in effect in Myanmar as of 1 a.m. local time,” noting that nationwide internet access on Sunday night stood at just 14% of normal levels.

The internet blackout followed shortly after the release of footage on social media showing security forces opening fire on protesters.

The military expanded its powers to detain citizens on Saturday, threatened to crack down on civil servants who join the protests and is carrying out mass arrests.

The International Crisis Group analyst in Myanmar, Richard Horsey, notes that many government departments have stopped working and have joined the protest.

The military junta has announced that it would hold new elections, but has not set a precise timeframe.