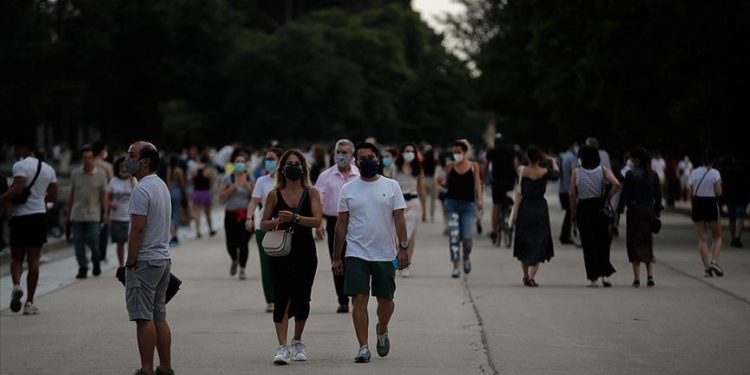 During the initial peak of Spain’s Covid-19 pandemic in the spring, the virus displayed an unexpected mercy. In its spread, ferocity and awful novelty, it left health workers too tired and overwhelmed to look beyond the next few hours.

“There’s no time to get angry or to wonder why things have been organised the way they have been,” Sara Gayoso, an A&E doctor at El Escorial hospital near Madrid, told the Guardian at the end of March.

Five months on, as Gayoso and her colleagues across Spain and many parts of Europe are braced for a second wave, there has been ample time for reflection.

Over the past two weeks, Spain has recorded more than 35,000 new Covid-19 cases – two-thirds of them in just three regions: Catalonia, Aragón and Madrid. According to the health ministry, there are currently 580 active outbreaks across the country.

Gayoso can hardly bear to countenance the idea of a second wave as devastating as the first.

“I don’t even want to think about it,” she said. “We’d obviously have to do whatever we could, but we’re still so tired that I don’t know we’d have the strength to go through it all again. If there was to be another wave like that one, it would be a catastrophe.”

But, for the time being at least, Gayoso’s hospital is not seeing anything resembling the scenes of the spring.

“The situation at the moment doesn’t bear comparison with how things were in March and April,” she said. “We’re dealing with a few cases a day, but most of them are allowed home unless they’re very old.”

And, as she points out, protocols have been put in place, stocks of ventilators and personal protective equipment (PPE) purchased and salted away, and staff advised to take their holidays now in anticipation of a busy autumn of Covid-19 and flu.

Juan Camilo Meza, an anaesthetist at Mataró hospital near Barcelona, also acknowledges that while the numbers are once again surging, “we’re nowhere near the kind of awful situation we were in a few months ago”.

As Meza and others point out, many of the new cases are asymptomatic and many are being detected in much younger people than last time round.

“I don’t think we’re going to see another peak as powerful as the previous one,” he added. “We’re seeing an uptick now, but that was always going to be the case.”

Cases are also mushrooming in France, where the president, Emmanuel Macron, has convened a meeting next week of the country’s defence council.

Macron called for “the greatest vigilance” and reminded people to “systematically wear masks” inside and “when it is not possible to keep the safe distance”.

His comments came as the number of new patients diagnosed with the coronavirus rose 33% in the week between 27 July and 2 August, according to the public health body, Santé Publique France. The week before saw a jump of 57% in the number of new cases.

“At the moment, we’re not seeing enough serious cases in hospital and intensive care to qualify as a second wave, but there is definitely a surge,” says Dr Serge Smadja, who is a GP in Paris and secretary general of SOS Médecins, the health response service that dispatches doctors to people’s houses.

“The figures went down and now they are going up so it’s a surge. The virus is still there. We cannot return to life as it was before as if nothing has happened.”

Like his colleagues across the Pyrenees, Smadja does not want to contemplate a return to the first wave.

“We don’t want to relive what we went through before,” he said.

“We are the frontline. Lots of our doctors were infected with Covid-19. We had a lack of equipment. Hospitals were at their limit of saturation. We had patients and no tests and no idea what we could do.”

But at least this time, he added, people know how to minimise the risks: “Everyone needs to be humble about this, take care and pay attention.”

On Thursday, Germany’s health minister, Jens Spahn, said the daily increase of around 1,000 cases was currently “manageable” for the health system, but warned the level should not be allowed to get much higher.

From Saturday, anyone returning from one of the country’s 130 Covid-19 hotspots will be required to take an obligatory test.

Germany’s main doctors’ association, the Marburger Bund, believes the country is already experiencing a second wave. Or, as the association’s head, Susanne Johna, put it: “We find ourselves in a second, flat upwards rise.”

Germany’s hospitals should be in a better position to cope now thanks to the introduction of beds specially equipped with adequate facilities to treat coronavirus cases, said Johna.

However, she suggested the country was “in danger of squandering the success we have achieved so far, out of a combination of suppression and a desire for things to return to normal”.

As the number of cases grows, so do the calls for a proper investigation into how things were handled during the first half of 2020.

On Friday, a group of 20 Spanish health experts wrote to the Lancet, calling for an independent evaluation of Spain’s response to the pandemic.

“This evaluation should not be conceived as an instrument for apportioning blame,” it said.

The idea was instead to establish exactly how a country with “one of the best performing health systems in the world” had logged more than 300,000 cases, more than 28,000 deaths – the majority of them in care homes – and seen more than 50,000 health workers infected with the virus.

Its signatories are not the only ones calling for lessons to be learned as quickly as possible.

“Back in March and April, we could all say, ‘this has taken us by surprise’ – and that was the excuse used for the system not being able to cope with all that,” said Pablo Cereceda, a surgeon at the same hospital as Gayoso, who is also a representative for the Amyts medical association.

“But now we can’t say we weren’t warned. We had three months of ‘ceasefire’ and if we haven’t made the most of it, it’ll be a disaster.”