Well, That Was Weird 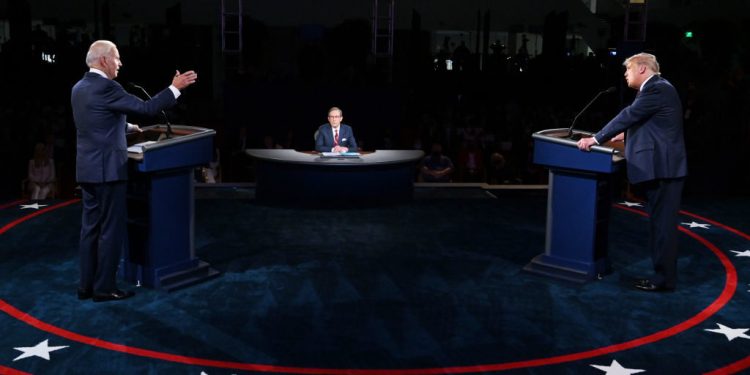 ”It is difficult to imagine that any American watched Tuesday night’s debate and thought to herself “that was great; we definitely need two more of those,” yet there are two more presidential debates between now and the election.”

This debate was difficult to watch for several reasons. On the quotidian side Trump’s nervous energy, inability to sit still and, when not actually interrupting, what amounted to a low-level hum of muttering attacks, made the debate unsettling for the viewer. On a more concerning level, spending ninety minutes in the alternative universe of Trump’s America is both surreal and horrifying.

The debate was also a reminder that Trump has been a major American political figure for more than five years now and most of the American media has continued to be complicit in refusing to address the extent of his mental incapacity. Although, relative to most of his public appearances Trump over-performed with regards to syntax, his bizarre grammar, slight misuse of many simple words and difficulty forming complete sentences remains striking. It should be news that when monolingual the President of the United States speaks English, it leaves one wondering what his first language is, but we no longer are surprised by that. For example, in the very first question, regarding the Supreme Court appointment, Trump clearly could not remember the name of Amy Coney Barrett, the woman he had nominated only days earlier. Sentences like “They had Merrick Garland, but the problem is they didn’t have the election so they were stopped,” reveal an unfamiliarity with facts and word usage that should be notable. After all, “didn’t have the election” suggests and election was no held at all, when presumably what Trump meant is that the Democrats lost the 2016 election.

Throughout the debate, Trump had trouble with names, policy details and specific events. It is true that Biden is an older man who also sometimes struggles to remember things, but compared to Trump, Biden sounded smooth and fluent, even when signs of his stutter reappeared. By refusing to wrestle with Trump’s verbal and mental limitations, the media continues to miss a major story, but more significantly are complicit in selling the lie of Donald Trump to the American people.

Trump’s core political strategy was again evident in the debate as well. By focusing too much on the horserace and whether, for example, white seniors will vote for Trump in large enough numbers, if he can bring suburban white women back or whether he can somehow expand his support, pundits too frequently miss what Trump is really doing. During this debate, as with virtually everything he has done in his campaign thus far, Trump has sought not to win new voters, but to keep his base highly motivated and mobilized. His goal is not to win the election fairly, but to ensure his most ardent supporters will continue to support him after he loses and refuses to accept the outcome.

Nowhere was this clearer than in Trump’s response to the questions asking him to denounce white supremacy. Instead of making a clear denunciation he appeared to speak directly to the Proud Boys, a white supremacist group, saying “Proud Boys, stand back and stand by.” Trump’s syntactical struggles notwithstanding, that seemed like a pretty clear call from Trump to the ugliest elements of his base to prepare for violence.

Trump’s prioritizing mobilizing his base rather than trying to win the election by getting more votes in enough states was also evident in his long answer to a question about “election integrity.” Phrasing the question in this way was already a concession to Trump. Biden has been in public life for half a century and has never done anything to suggest he does not or would not respect the outcome of an election. Asking Biden to address this issue, was dragging him into a problem Trump has created while ignoring Biden’s unfailing integrity on this issue. However, Biden gave the right answer essentially saying everybody should vote, we should make voting as safe as possible and that the votes should all be counted. It is both telling and depressing that in 2020 that is considered a partisan position.

Trump’s response was a disturbing medley of half-baked conspiracy theories sourced from far-right media, incoherent ramblings about “the ballots” and, perhaps most disturbingly, threats. One of the last comments Trump made was:

“I’m urging my supporters to go in to the polls and watch very carefully, because that’s what has to happen. I am urging them to do it. As you know, today there was a big problem. In Philadelphia, they went in to watch. They’re called poll watchers, a very safe, very nice thing. They were thrown out. They weren’t allowed to watch. You know why? Because bad things happen in Philadelphia. Bad things.”

This should be understood as a call to his supporters to go to the polls and intimidate voters. That is what “watch carefully” meant-and that was not lost on Trump’s base, a base that includes the Proud Boys who Trump has told to stand by. His mention of “bad things” in Philadelphia is a reminder of Trump’s childlike vocabulary, but is also racial code. Philadelphia is a heavily Democratic and African American city in the key swing state of Pennsylvania. High turnout in that city, with all the votes being counted, could be the key to Biden’s victory.

The debate was chaotic, unnerving, difficult to follow and even frightening at times. Both candidates performed as expected. Trump was dishonest, bullying and erratic. Biden was calmer, but did not communicate as effectively as he might have. For example, he did not explain that the reason Obama left so many judicial positions vacant is because Mitch McConnell would not let the senate confirm many of Obama’s nominees. Call it a draw, but with Biden’s solid lead in the polls, a draw is all he needed. I think I speak for many Americans when I say do we have to do this two more times and can’t we just watch the baseball playoffs instead.