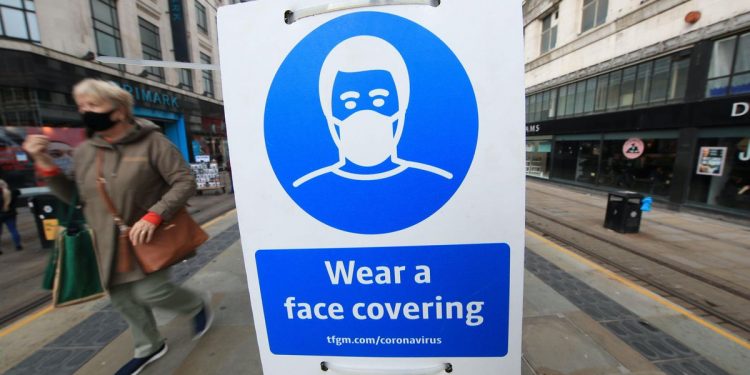 London (Brussels Morning) Last week, the UK government announced its new three-tier strategy for managing the spread of the coronavirus within its borders. While all the devolved nations have been coordinating with Westminster, they are individually responsible for their own strategies, and the rules have varied as a result.

It is still a more streamlined way forward than the approach until then, which had led to disparate rules between localities and confused messaging, which much of the public felt left them without much clarity.

This system is still localised but encompasses areas into much more broad categories:

Businesses have been among some of the new system’s biggest critics, particularly in the hospitality industry. As inter-household socialising is essentially banned indoors, there’s a lot of trade that will be lost. Already the hospitality trade has warned there could be around 250,000 job losses in the capital alone.

Manchester has also been up in arms, refusing to accept the new rules should the city region be moved into the third risk category. The problem at large is that Mayor Andy Burnham insists that there is just not enough support to businesses to withstand the pause in trade. The restriction, therefore, needs much more financial backing from the government, according to Burnham.

There are those, of course, who believe the restrictions do not go far enough. Many have touted the need for a “circuit breaker”, the name being given to a mini lockdown of around two to three weeks to be applied nationally, something Boris Johnson’s government has refused for England. Scotland, Northern Ireland and Wales have gone ahead with their plans for a mini lockdown.

Johnson and co’s refusal also flies in the face of the government’s own scientific advisors who have said a circuit breaker should be applied swiftly. The rejection came to light in leaked meeting minutes revealing the Scientific Advisory Group for Emergencies (SAGE) recommendations, which has brought on questions on why the government is not, in fact, following the science, like it said it was doing at the beginning of the crisis.

There is also incredulity at why it’s taking so long to get the virus under control. Gabriel Scally, from the University of Bristol and a member of the Independent Sage committee, writes in the Guardian that “the government has failed as to provide any form of strategic framework within which the tiered restrictions might have a role” and she adds, in controlling the pandemic. An effective find, test, trace, isolate and support (FTTIS) system is crucial to doing this, but that one isn’t functioning right now is indicative of the ineptitude of the government and its advisers or “a deeply ingrained delusion that any major problem or catastrophe can best be resolved by pumping billions into a select number of private sector corporations”, referring to those being contracted to help with the test and trace process.

Selma Rehman, writing in the National, was quick to point out that the restrictions are impacting those in the north mostly and the system in play will only serve to widen the north-south divide. “Centralised Tory power in London has both ignored and isolated English local authorities and their leaders throughout the Covid crisis… So what if those “northern” leaders are holding out for better financial support packages for their areas? Why shouldn’t they? But how long will they, can they?” she writes.

However, those in London are grumbled too but want more restrictions in the form of a circuit breaker — at least London’s mayor, Sadiq Khan, does, as he writes in the i Paper:

“We simply can’t afford for the government to be slow to act again. The supposed choice between saving the economy and saving lives – between restrictions and freedoms – is an entirely false one. The reality is the later we take the necessary steps to slow the spread of the virus, the more severe these steps will have to be and the longer they will have to last in order to drive down infection rates”.

Officials have warned that the winter ahead will be challenging, so normalcy isn’t to come anytime soon. However, the tiered restrictions have no time limit, so there’s yet no indication of just how long people will have to live in a state of limbo.