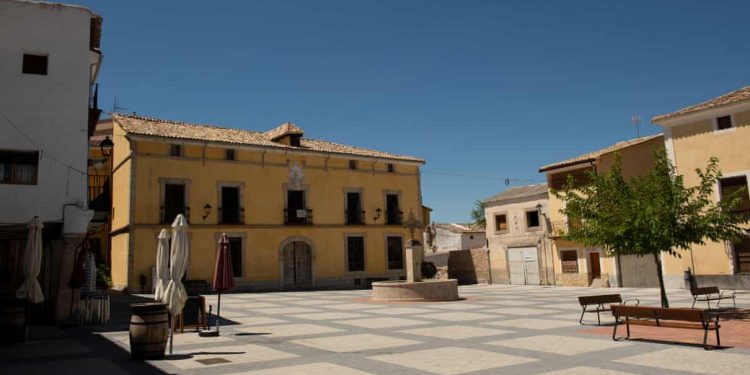 On the wall of a small flat in Pareja, not far from the chemist, the plaza mayor and the 16th-century church, hangs a picture of a wooden farmhouse set among the palms and endless plains of western Venezuela.

Were the painting bigger, it would show the mud-brick bread oven where Ángel Márquez and his family baked bread to sell, and the cows, the pigs and the horse they left behind when they finally decided enough was enough.

In November last year, Márquez, his wife, Zaida Varillas, and three of the four children they have between them, abandoned their home in Venezuela’s Barinas province and came to Madrid. By then, their combined salaries as teachers had fallen to $10 a month and no longer covered the costs of food.

After selling their pick-up truck, they joined the exodus in which more than 4 million Venezuelans have left their homeland as its economic and humanitarian crisis continues.

Today, along with two other Venezuelan families, they live and work in Pareja, a hilltop town of 400 people in the central Spanish region of Castilla-La Mancha.

Like many towns in what has come to be known as La España vaciada – “the hollowed-out Spain” – Pareja is picturesque, rich in history – and succumbing to depopulation.

Younger people move away in search of work and opportunities, taking with them their labour, their skills and, perhaps most importantly, their children.

Their absence upsets traditional demographic balances, condemning many small towns and villages to an ineluctable decline as shops and services shut down, schools close their doors because of a lack of pupils, and only the older people stay on.

The statistics speak for themselves: 90% of Spain’s population – about 42 million people – is packed into 1,500 towns and cities that occupy 30% of the land. The other 10% (4.6 million people) occupy the remaining 70%, giving a population density of barely 14 inhabitants per square kilometre.

Over the past decade, 80% of Spanish municipalities have experienced population falls – a figure that rises to 90% for towns, such as Pareja, that have fewer than 1,000 inhabitants.

Spain’s Socialist-led coalition government has responded by creating a ministry for what it terms “the demographic challenge”.

But the Venezuelan families are in Pareja thanks to a small new NGO, the Towns with a Future Association, which is working to match depopulated areas with migrants in search of a new life in rural Castilla-La Mancha.

Established in January, the association is working with eight migrant families with children and about 35 individual migrants. While many of the migrants it helps are from Venezuela, it is also assisting people from Colombia, Peru, Honduras, Nicaragua, Guatemala, Ukraine, Mali and Nigeria.

Márquez and his family, who spent seven long and hard months in Madrid before settling in Pareja in June, are enchanted by their new home.

Both have renounced any benefits while they wait for their asylum application to go through and are working in the town, Márquez as a handyman for the council, and Varillas as a carer for some of Pareja’s elderly residents.

“Life here is so much calmer than in Madrid,” says Márquez. “The people here have been really welcoming. They’re giving us shelter here and we’re going to stay here to help bring life back to these towns.”

When the local school reopens in September, Márquez and Varillas’ two young sons, Sebastián and Santiago, will begin classes.

The Towns with a Future Association hopes that others will follow the lead of Pareja’s mayor, Javier del Río, and open themselves to newcomers. As one of the association’s founders points out, the benefits are myriad and mutual.

“The situation for migrants in Madrid – whether they have the papers they need or not – is really difficult,” says Dorys Castillo.

“The scheme helps them because they stop living on benefits and that’s fundamental: they become independent economically. And the project has quite a big impact socially because it’s something that helps the families and the towns.”

But Castillo is careful to stress the needs for a careful and well-planned matching process.

“You can’t start bringing in more people than a town or village can accommodate, even if they’re depopulated,” she says.

“You have to think about the town and the people there. But, bit by bit, people in these towns get to know the new people and see them as people, not as people from a particular country. They rub along very naturally and work together.”

So far, the reaction in Pareja has been encouraging.

Antonio Ridruejo, a retired truck driver who has lived in the town all his life, is pleased to see the newcomers – especially the youngest ones.

“We need people here – young people – because there are hardly any children here,” he says as he looks out over the main square.

“If there were no children, we’d have to close the schools and it would be a dead town. If you don’t have any young people, you have nothing.”

Márquez is recuperating from appendicitis and peritonitis. As well as looking after his sons, he passes the time painting, writing nostalgic songs on his four-stringed Venezuelan cuatro guitar, and thinking about the land he has left behind and the land he has found.

“I miss my country a lot – and my farm – but the mayor has lent us a little allotment here,” he says.

“We’re growing corn, beans, coriander, spring onions and tomatoes. But no chillies yet. There’s a tiny little piece of Venezuela in Pareja.”