‘We don’t know what to do’: asylum seekers flown to Spain by Home Office 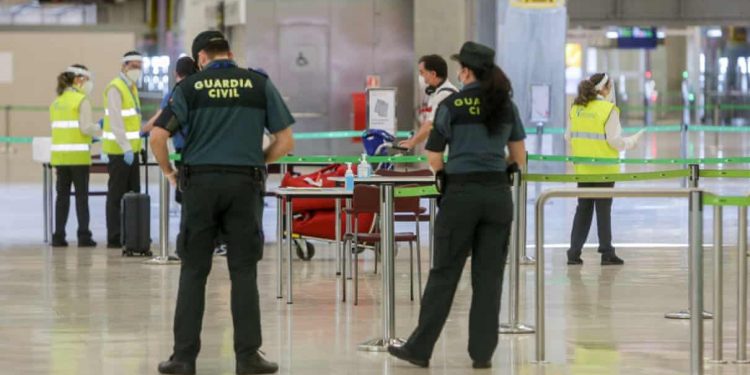 Eleven Syrian asylum seekers have been abandoned outside the airport in Madrid where a Home Office charter flight deposited them, the Guardian has learned.

The men, ranging in age from 18-45, said they had been sitting in temperatures of 32 degrees since their flight landed in the Spanish capital at around 10am on Thursday morning.

The asylum seekers said many of them were removed from the UK without their identity documents.

One man told the Guardian he has three brothers in the UK, while another said he had two. Family ties in the UK are part of the claim to remain that the Home Office considers under rules known as the Dublin regulation, whereby one European country can return asylum seekers to the first European country they are known to have passed through.

The men said they had used the same solicitor to try to halt their removal from the UK to Spain, and had paid him thousands of pounds between them, but their enforced removal was not halted.

They said they all came from the same area in the south of Syria.

One man said he had worked as a farmer before the conflict in Syria began, and that he had left his wife and four children, hoping to bring them to join him if he was granted refugee status in a safe country.

Syrian refugee claims are generally accepted in many European countries but the Home Office sent the 11 men back to Spain because all had been fingerprinted by the police there.

“I spent two years after fleeing Syria trying to reach safety,” said one 45-year-old. “I spent about four months in Calais trying to cross by small boat and finally succeeded in April.”

He said he had taught himself to speak English on YouTube.

“I was so happy when I reached the UK but the way I have been treated by the UK has destroyed me. I was held in an underground jail for a year and a half in Syria and when the Home Office arrested me and put me in Brook House detention centre near Gatwick airport it brought back all the memories of that time.”

He said everyone was told to go quietly to the plane and that if they did not behave, the escorts would use force against them. “Many of the men were crying on the plane,” he said.

None of them know what they can do now.

“We don’t know what to do. We are sitting a few hundred yards away from the airport. We have no food, no water, we don’t know where we can go. We are homeless and hopeless,” he said.

Three brothers from Yemen who were due to be put on Thursday’s flight were granted a last-minute reprieve. A Guardian reader who read about their case and who lives in Spain offered to help them. She is now trying to identify support for the 11 asylum seekers left outside the airport.

A spokesperson for the Spanish ministry of the interior said they were aware of the case, and that anyone could request international protection in Spain at any time.

But the Syrian asylum seekers said there were no English or Arabic interpreters at the airport and that they had to leave the building.

Home Office sources said that the UK is under no obligation to monitor the treatment of asylum seekers who have returned to the EU member state responsible for their claim.

A Home Office spokesperson said: “Under the Dublin III process, the time and place of the arrival of today’s flight had been carefully worked through between the UK and Spain by mutual agreement – formal requests were made of Spain in advance and they accepted responsibility for the claimants in accordance with the Regulations. Any suggestion that the Home Office has not complied with our obligations is incorrect.

“A travel or identity document is not required for that country to process an individual as the details of those being returned are shared and agreed in advance.”