War in Nagorno-Karabakh – a Balkan moment for the EU 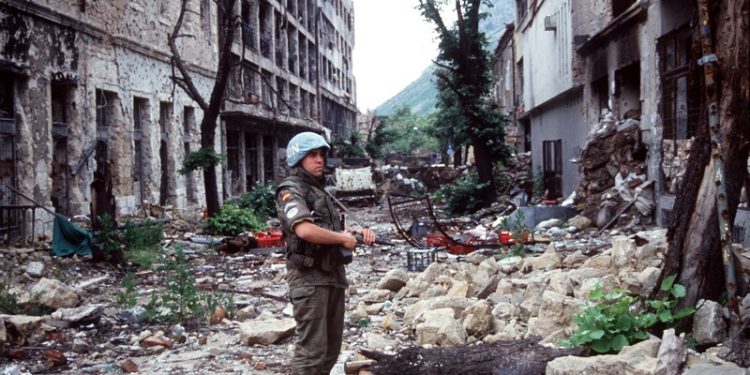 Brussels (Brussels Morning) The breakup of Yugoslavia cemented the view that the EU needed to adjust if it was to become a credible foreign policy actor. Its inability to bring about peace and order in its own neighbourhood should not become the defining image of the bloc on the world stage.

At the time, the European Union’s Eastern flank consisted of Italy and Austria and the Balkans were then very much the immediate neighbourhood. Enlargement has brought new borders and with it, a new neighbourhood that is not in great shape. The continued war in the Eastern Ukraine has destabilised the country, while Belarus is locked in a political standoff that will presumably shape its destiny for the ensuing decades.

The return to war between Azerbaijan and Armenia over Nagorno-Karabakh is the latest threat to peace in our neighbourhood, and has the potential to be the most dangerous to date.

Many are yet to appreciate the scale of the problem, choosing to see this as simply “a resumption of hostilities” that will soon blow over. As fighting enters its fourth week, however, we have already seen two negotiated ceasefires fail to stem the violence – each lasting for only minutes.

We can also see old and new dynamics in this latest episode of the conflict. As in the past, the struggle is characterised by information warfare between the sides, with conflicting intelligence on casualties and deployment locations, making it in some cases quite hard to attribute blame and irrefutable responsibilities on one party or the other.

However, there are some considerations to be made at this point, the first and foremost being that Armenia lacked any incentive to initiate such military action, primarily because of the status quo being far more acceptable for Yerevan than for Baku. A second element is the asymmetry in military spending by the two countries in the last years, with Azerbaijan investing in its military several times more than Armenia, with the latter being disadvantaged with regard to military power and thus evidently more interested in keeping a clear commitment on the on-going negotiations in the framework of the Minsk Process.

What is new and extremely worrying, compared to the past, is the strengthened and open support of Turkey, both diplomatic and military, to Azerbaijan.

Mounting evidence suggests the probable recruitment and transfer of Syrian jihadist mercenaries via Turkey to Azerbaijan, as took place before the 27 September offensive. It is not only a dangerous development in itself but may also be evidence of pre-planning. International journalists were investigating such reports in the weeks leading up to the initial clash and President Macron’s statement on the issue adds to the truthfulness of the reports.

While expert opinions, coupled with statements at highest levels coming from several capitals, are all but unanimous on who pulled the trigger in the latest escalation, in my opinion there is at least circumstantial evidence that Azerbaijan would be the most interested party in beginning and protracting the struggle in an effort to change the situation on the ground manu militari rather than via peaceful negotiations.

Regardless, as the war continues, the conflict is quickly becoming a humanitarian disaster. The repeated shelling of Stepanakert and dozens of towns and villages of Nagorno-Karabakh, followed by Armenian retaliations, has already seen tens of thousands flee and dozens of civilians killed. Amnesty International has also confirmed the deployment of cluster bombs by Azerbaijan as part of these attacks, a practice banned under international humanitarian law.

The conflict, by reliable estimates, has already seen nearly a thousand soldiers killed and both sides have suffered the loss of civilians – the total already above a hundred. Given the level of communal violence witnessed during the original war, there can be no doubt as to the potential for disaster if solutions are not soon found.

The EU’s response has so far been weak and lacking its declared ambition to be a relevant geopolitical actor and a game changer for stability, security and prosperity, especially in its neighbourhood. Whilst calling for an immediate ceasefire and a return to peace talks, it has been hesitant to attribute blame for this particular offensive and has been overly cautious in naming Turkey as a sponsor to the escalation.

This is the first thing that must change if the EU’s voice is to be used effectively. The high representative Joseph Borrell puts efforts into mediating among the parties, in an extremely difficult situation. Meanwhile, the continued messages that build up a constructive ambiguity by calling on both sides to halt the fighting, paradoxically so in this case when there are clear signs as to who the aggressor might be, do not offer enough deterrence for the assailant to halt its activities and go back to the negotiating table. More concrete pressure must also be applied to convince Turkey to refrain from further escalating the situation – it is still negotiating for EU membership and is after all a member of NATO.

As for the wider conflict, the EU must stand ready to play a greater role in the OSCE peace talks and to come prepared with meaningful solutions. If and when a ceasefire is brokered, the first priority must be to finally implement the long discussed ceasefire monitoring mechanism. The ability to independently monitor the line of contact will not only act as a disincentive to actual breaches but it will also be able to apportion blame when they occur.

Armenia, together with the OSCE Minsk Group co-chairs France, the US and Russia, has been calling for its implementation since 2015 and broadly favours an approach whereby the monitors can roam freely and act without any prior permission from any of the authorities in situ. Azerbaijan has so far objected to such an approach: the EU should actively work to push it to properly engage with these proposals.

Beyond disagreements as to the working mandate of this mechanism, the makeup of outside actors has also been problematic. The EU and its Member States should work together to offer personnel to such initiatives, both for practical reasons as much as a symbolic gesture of  real engagement with the wider conflict by an honest broker, giving the parties reason to believe in the possibility of a negotiated solution.

At a time when the Commission talks of itself in “geostrategic” terms, when the Council embarks on measures to ensure it can truly boast  “strategic autonomy” and as the High Representative continues to make his case for a move to Qualified Majority Voting (QMV) over CFSP activities, it is surely a time to act more assertively as one of the 1990s deadliest conflicts looms once again. It is time for the EU to embrace its second Balkan moment.