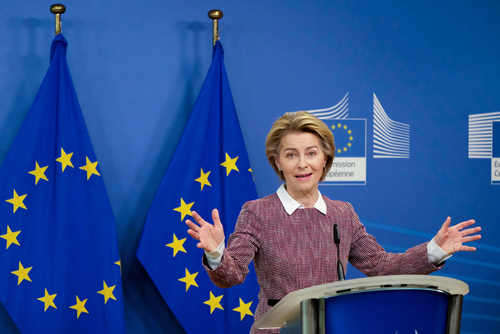 In a statement issued after they met, von der Leyen promised Zelensky that the Union would work closely with Ukraine “to increase gas supply capacity coming from member states of the European Union.”

Von der Leyen also stressed that the EU is “exploring different scenarios to secure sufficient supply for Ukraine”. Her comments come as Ukraine is becoming increasingly concerned about the potential impact of the German-Russian Nord Stream 2 gas pipeline on its future as a gas transit country, and also its energy security, given that most of its gas comes from Russia.

Russian-Ukrainian relations have been tense for years, following the Russian annexation of the Ukraine’s Crimea peninsula, plus the civil war between Moscow-backed pro-Russian separatists in the eastern Donbas region and the Ukrainian government forces.

Von der Leyen also reiterated the EU’s commitment to Ukraine’s sovereignty and the Minsk agreements, the series of accords signed in 2014 and 2015 intended to end the war in the east of the country. Despite a nominal ceasefire, hostilities have been flaring up in recent months as growing numbers of Russian troops have been moved into areas close to the Ukrainian borders.