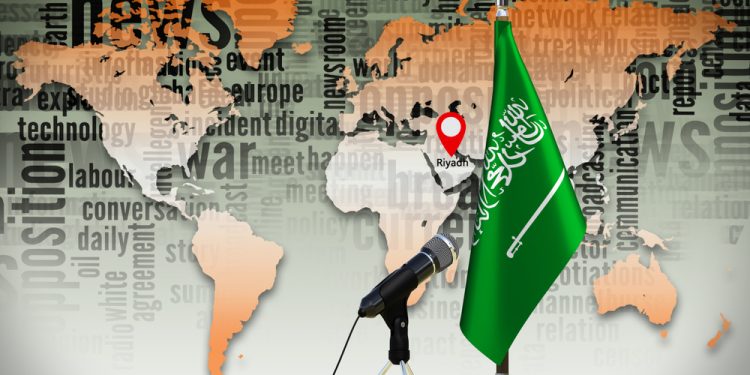 Paris (Brussels Morning) This year’s G20 Summit focused on the challenges brought about by the Covid-19 pandemic, but its virtual tenure didn’t accomplish the aspired grandiose return to the global stage the king and his son had hoped for.

The 2020 Summit was a first on several counts. It was the first of the forums to be hosted by an Arab country, the Kingdom of Saudi Arabia, and the first to be held almost entirely online, due to the restrictions forced by the virus.

The 15th meeting of the group of 20 was also the first where a sitting American president made so little impact. Persisting with claims of election fraud and refusing to concede to Joe Biden, the lame duck US President Donald Trump briefly addressed his homologues, promised to work with them “for many years to come” and then set off for a round of golf, as reported by the Washington Post.

The summit was an opportunity for G20 nations and groups of nations to repeat their commitment to multilateralism, through institutions such as the World Health Organisation (WHO), as well as the Paris Agreement on climate change.

In his remarks at the virtual meeting on Sunday morning, Trump reiterated his opposition to the Paris Agreement, claiming it was “not designed to save the environment” but instead “was designed to kill the American economy”, according to the New York Times.

Furthermore, the online nature of this year’s summit prevented leaders from meeting during sideline talks and negotiations that often take place in such gatherings and can bear more fruit than official meetings, as international media have widely noted.

The pandemic, ensuing financial crisis and questions over the global and equal distribution of the coming vaccines were at the heart of the summit. Leaders of the G20 vowed to ensure that the supply of drugs, tests and vaccines be conducted fairly and affordably for all countries in order to avoid deepening divisions among rich and poor.

“The COVID-19 pandemic and its unprecedented impact in terms of lives lost, livelihoods and economies affected, is an unparalleled shock that has revealed vulnerabilities in our preparedness and response and underscored our common challenges”, the final communique said. G20 will work to “protect lives, provide support with a special focus on the most vulnerable, and put our economies back on a path to restoring growth, and protecting and creating jobs for all.”

“No effort will be spared” to tackle the sharp contraction that has affected the global economy — namely transport and trade — due to the measures to curb the spread of the virus, France24 reported.

Kristalina Georgieva, head of the International Monetary Fund (IMF) warned that the global economy “stands at a crucial turn”.

A new framework to provide debt relief for poor countries that have been hit hard by the pandemic was set, as well as the freezing of bilateral debt payments throughout June 2021, an initiative that was welcomed by President of the EU Commission, Ursula von der Leyen.

But this measure is seen as lagging behind the challenge of extreme poverty that will soon face another 100 million people. Action Aid Katherine Tu was quoted by Le Figaro as saying that the G20 is “sticking its head in the sand instead of responding to the urgency of the situation”.

King Salman said in his closing remarks that the group had “adopted important policies that will achieve recovery all the way to an economy that is resilient, sustainable, inclusive, and balanced”.

When Saudi Arabia was handed the rotating G20 presidency in December 2019, it saw this as a tremendous opportunity to work its way back to the international stage and revamp its image following years of aggressive foreign policy attitude and an abominable human rights record.

Saudi Arabia and Crown Prince Mohammed Bin-Salman’s (aka MBS) image is still reeling from the impact of the Jamal Khashoggi murder and the devastating war in Yemen, and more recently, activists and INGOs have put great pressure on the regime to release prisoners and female activists, journalists and academics detained in horrifying conditions in Saudi prisons.

Calls for their release have multiplied recently, especially as the case of women’s rights activist Loujain al-Hathloul has gained media attention. Al-Hathloul has gone on a hunger strike for more than a month and her trial is to resume in Riyad this week.

As the Guardian reports, she and another 12 activists are accused of conspiring with foreign organisations hostile to the Kingdom. Al-Hathloul’s family, the BBC adds, said she was held incommunicado for three months following her arrest, and that she was subjected to electric shocks, whippings, and sexual harassment. The government has denied allegations of torture.

Pressure was also exerted on G20 leaders to abstain from the meeting, such as the EU’s Ursula Von der Leyen and Charles Michel, as well as UK Prime Minister Boris Johnson.

Amnesty International called on leaders of G20 nations to denounce the “hypocrisy” of the regime with regards to its human rights abuses. While the Saudis tried to downplay the wide criticism, the G20 participants defended their choice to attend the summit saying they prefer to take the human rights issue on a bilateral level.

Amid increasing criticism, the Saudi leadership appears to be promoting the positive aspects of its reform programme, while accusing organisations for meddling in its “internal affairs”, as Al-Jazeera reports.

The virtual platform of the G20 was also a huge blow to MBS’s ambitions to promote the modernisation plan called Vision 2030 and attract investors in the Kingdom, according to the Arab Gulf States Institute in Washington.

Closely linked to the profile he is building as the country’s future leader, Vision 2030 is MBS’s main tool to convince international partners that the country is moving towards an era of reforms, gender equality, green and renewable energy, government transparency and investing in the country’s huge human capital, however, in a top-down manner as LeMonde notes.

The summit was thus seen as MBS’s missed opportunity to showcase the restoration projects in various historical and archaeological sites across the country, including the nabatean necropolis of Al-Ula or the futuristic NEOM site at the Red Sea coast.

On the other hand, Human Rights Watch has called the G20 presidency accorded to Saudi Arabia an “unmerited mark of international prestige”.

However, as his policies have proven until now, the sleek brochures and grandiose receptions in opulent palaces hide a very different reality. As leading Professor of Sociology Madawi al-Rasheed underlines, the Kingdom is moving onto an intensifying authoritarian course, marked by tribalism, xenophobia and a massive crackdown on any dissent that casts a dark shadow on the country’s prospects for real modernisation and rule of law.