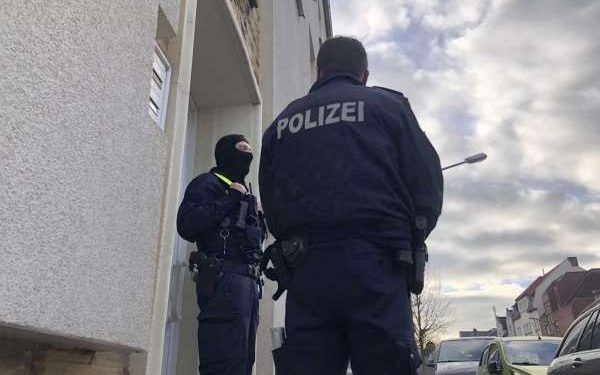 Brussels (Brussels Morning) German police have raided the homes of four persons suspected of having ties to the Vienna attacker, DW reported today, Friday. About 15 people have been detained in Austria and two in Switzerland since the attack in Vienna on Monday.

The German Federal Criminal Police Office (BKA) noted that Friday’s raids were conducted in Osnabrück, Kassel and Pinneberg. While there is no initial suspicion that the four people in question took part in the attack in Vienna, the BKA pointed out that there are apparent links to the attacker.

After killing four and injuring more than 20 people in Vienna, the attacker was shot and killed by police. He had already been convicted in Austria for attempting to join the Islamic State of Iraq and the Levant (ISIL) in Syria. Austria’s Interior Minister Karl Nehammer pointed out on Thursday that the attacker was apparently linked to a radical Islamist network that extended to Switzerland and one more country.

While Nehammer did not name the second country, German Interior Minister Horst Seehofer noted on Thursday that there was a connection to Germany. Seehofer announced German security agencies would evaluate and check the attacker’s contacts, while Swiss police said they detained two acquaintances of the attacker near Zürich on Thursday.

Nehammer pointed out that of the 16 persons detained in Austria, four had previous convictions for terrorism-related offenses — two for violent crimes and two for an attempted honour killing. He added that the Interior Ministry has been cooperating with the FBI, which had provided Austrian authorities with valuable information.

On Thursday evening, imams, rabbis and the Archbishop of Vienna Christoph Schönborn held a vigil, walking past attack sites and praying together for the victims.

The Central Council of Muslims in Germany (ZMD) has announced a peace rally at the Austrian Embassy in Berlin later today, Friday. The ZMD called for the rally in the wake of Islamist terrorist attacks in France and Austria, noting that an inter-religious group prayer service is planned. Those attending will light candles and lay flowers to commemorate the victims.

ZMD head Aiman Mazyek is to give a speech, with the Bishop of the Evangelical Church in Berlin Christian Stäblein, the Catholic Archbishop of Berlin Heiner Koch, the chair of the General Rabbinical Conference of Germany Rabbi Andreas Nachama and the Austrian Ambassador to Germany Peter Huber participating at the rally.