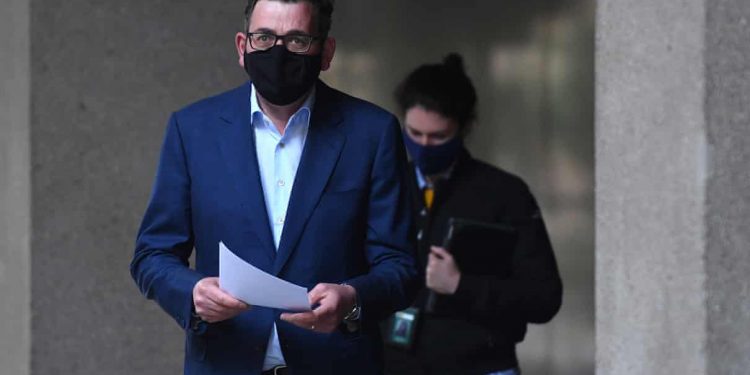 Another 19 people have died from Covid-19 in Victoria, taking the state’s death toll to 246, as the premier, Daniel Andrews, and other senior officials faced questions at a parliamentary inquiry into the pandemic.

Andrews told reporters on Tuesday there were now 1,185 healthcare workers with active cases of Covid-19. Andrews reported 331 new cases across the state.

The health minister, Jenny Mikakos, faced questions on Tuesday about healthcare worker infections when she appeared before the public accounts and estimates committee inquiry into the Victorian government’s response to the pandemic.

Asked by Greens MP Sam Hibbins about the number of health workers infected in the workplace as opposed to in the community, Mikakos said up to 15% of those with active infections had been infected at work.

She said 37% of healthcare worker infections were among nurses. Asked by Hibbins how many student doctors and nurses had been infected in the workplace, Mikakos said she did not immediately have that data available. She said Prof Andrew Wilson, the chief medical officer at Safer Care Victoria, would be investigating how health workers were becoming infected.

“We’ll be engaging with organisations to drill down to the heart of these issues and what more we could do to protect our dedicated healthcare workers in their important work,” Mikakos said.

During his daily press briefing, Andrews told reporters there was some “variability” in terms of access to personal protective equipment (PPE) between health settings, but he was “getting reports from across the board that health staff, regardless of what role they play, are confident that they’ve got the PPE that they need”.

Earlier on Tuesday, Andrews faced questions at the inquiry regarding the state’s hotel quarantine program. A breach in infection control procedures by security staff contracted by the government to monitor returned international travellers was one of the factors that triggered Victoria’s second wave on infections.

Andrews said he would provide a separate independent inquiry into the program, chaired by former judge Jennifer Coate, with all emails and correspondence to help answer questions about the program’s failures.

The premier told the committee that Australian Defence Force members hadn’t been offered to guard the hotels at the time the scheme was introduced.

“It is fundamentally incorrect to assert there were hundreds of ADF staff on offer and somehow someone said no. That’s not, in my judgment, accurate,” Andrews said.

But in a subsequent statement, the defence minister, Linda Reynolds, said ADF support was offered to Victoria “on multiple occasions” from late March.

“The ADF was consistently advised that its assistance was not required for any “public-facing roles’ in Victoria,” she said.

Andrews acknowledged the economic impact of the second wave would last for years. “There will be a budget later on in the year acknowledging the damage that has had to be done in order to [combat the virus],” he said.

“That’ll be a major feature of the budget, as well as the impacts not just on business but on workers’ families, communities. We know that this is a one-in-100-year event, and the damage done because of it will be long-lasting and will be very significant.”

Meanwhile, the state’s chief health officer, Prof Brett Sutton, was asked by the inquiry whether there was any advice he had given to the government that had been ignored.

“There are no actions that I can recall that are against my advice,” he responded. He said the only issues raised with him regards to the hotel quarantine program, when it was in place, “were not about staffing of security staff, and were not about infection prevention and control measures”. However, issues had been raised about the coordination of data, the coordination of welfare support from medical and nursing staff, and issues around subcontracting of health services, Sutton said.

“They were referred, as appropriate, to the quarantine command structure which I was not a part [of].”

The health department secretary, Kym Peake, told the committee that the development of the plan for hotel quarantine was signed off on by emergency management commissioner Andrew Crisp.

“Following the announcement of the program, the state control centre brought together the relevant departments and agencies and [was] supported by the ADF,” she said. “There was a first operational plan that was developed very quickly, which just defined the roles and responsibilities of all the agencies and departments that were involved.”

A governance group made up of officials from the health department, Victoria police, the justice department, the Department of Premier and Cabinet and the transport department were ultimately overseeing the hotel quarantine. In April, there was an emergency operations centre created to support the governance group, with an accommodation commander chairing the group.