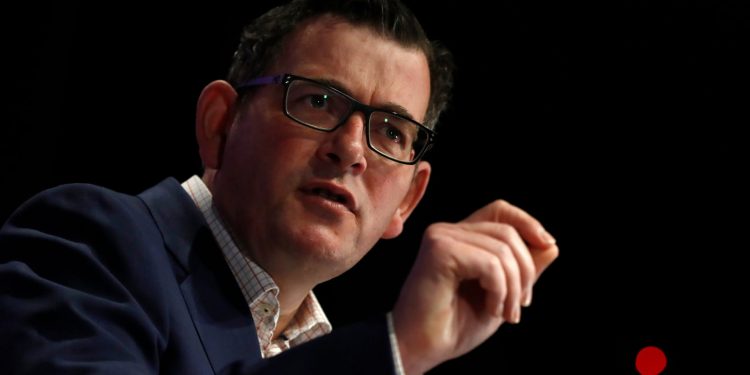 Wednesday marked Victoria’s most devastating day of Covid-19 cases and deaths, with a man in his 30s among 15 people who died overnight including many from aged care, and 725 new cases of the virus identified.

There are 538 Victorians in hospital, 42 of them in intensive care. The premier, Daniel Andrews, confirmed the man in his 30s – who is the youngest person to die from Covid-19 in Australia – was not a healthcare worker. There are currently more than 700 health workers with active cases of the virus. He said he could not provide further details about those who died without permission from families.

“Can I send my heartfelt condolences and sympathies to each of those families,” Andrews said on Wednesday. “This will be a terrible time and any and all support we can provide to you we will, and we are with you in this very difficult time.”

The deputy chief health officer, Prof Allen Cheng, said when there was an outbreak in aged care, an assessment was made as to whether residents would be better off in hospital or aged care. But sending many patients to hospital could not continue indefinitely because “everything has a limit”.

“The number of people in hospital has increased primarily but not only because of transfers from aged care and a lot of those transfers are not for clinical [reasons], not because they’re sick but because of infection control reasons,” Cheng said.

The comment prompted the health minister, Jenny Mikakos, to interrupt to state: “So we do have some capacity to continue to absorb more residents from aged care facilities.

“To date we have had more than 300 aged care facility residents transferred to either public or private hospitals,” Mikakos said. “Obviously those decisions are made on a clinical-care basis, it can be very traumatic for aged care residents to be transferred from what is their home … to a hospital environment, but we won’t hesitate to do that.”

Meanwhile Andrews said non-urgent surgery in regional areas would stop in order to boost hospital capacity to treat Covid-19 patients, with increasing cases outside of metropolitan Melbourne. Nurses from public and private hospitals have also been brought in to aged care homes, reducing their availability for surgery.

“We can’t have a situation where we are making the sickest patients wait longer because we are treating wholly worthy and important conditions, but not necessarily time-critical conditions,” Andrews said. “We can’t put those ahead of people who need that urgent care. The sickest patients must get treated quickest. That is always a principle that our public and indeed private hospitals work under. This is a regrettable decision but it is a very important one in order to preserve sufficient capacity in our entire health system.”

Of the 725 new cases of the virus, 164 are linked to outbreaks including those in aged care and 561 under investigation. The state’s death toll is now 162.

Andrews said all aged care facilities could now be described as “stable” and many had been handed back to private operators to manage following interventions from the state and federal governments.

From midnight, most retail businesses will close for six weeks, and most Victorians will work from home with metropolitan Melbourne under stage four lockdown. It is a measure that will see a further 250,000 Victorians stood down.

Meanwhile in New South Wales, 12 new Covid-19 cases were diagnosed overnight. Of those, one is a traveller in hotel quarantine, 10 were locally acquired and linked to known outbreaks, and one was a locally acquired infection with no known source.

“NSW Health can advise a previously reported case attended Kids Learning Academy in Busby while infectious on 29 July,” the state health department said in a statement.

“While most cases in the past week have been associated with local clusters and close contact with known cases, some have not been linked to known cases,” the department said.