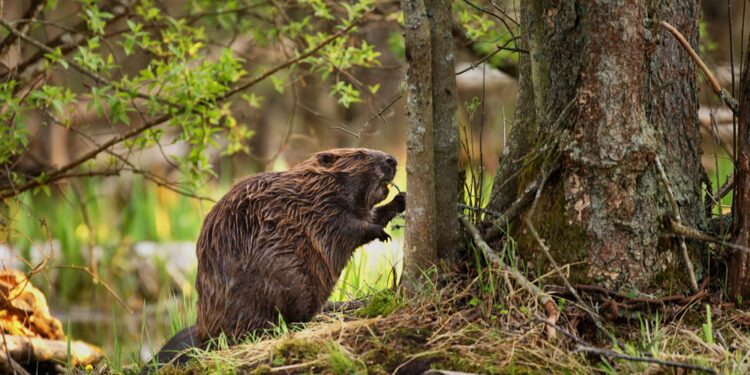 Brussels, (Brussels Morning)- In Laeken, a hunter has found a dead European beaver. This is remarkable, because the protected rodent is listed as ‘very rare’ within the borders of the Brussels Region as reported by BRUZZ.

It is a remarkable find that a hunter in Laeken – right next to the Royal Palace – made a few weeks ago. He was able to capture a European beaver on photo, which is exceptional within the borders of the Brussels Region. “It could well be the first, maybe even the only beaver in Brussels in twenty years,” points out Thomas Merckx, biologist at the Vrije Universiteit Brussel (VUB).

Although beavers are protected rodents, they are not common in Belgium. In the Brussels-Capital Region, only one beaver was spotted in the period 2001 – 2017, near the marina in Laeken to be precise.

And yet, they play an essential role in the fight against the increasingly intense droughts that also affect Brussels. “The most important thing is that they rehydrate the soils, which reduces the risk of flooding. Thanks to the dams they build at water features, they have a direct influence on the water household,” says the biologist, who specialises in global change biology .

Measures to better protect them are therefore crucial, Merckx believes, “just like for the wolf in Flanders. The fact that wild animals and mammals are hit so easily in Belgium has everything to do with our dense road network. More wildlife passages are needed. where animals can safely cross busy lanes, such as ecoducts, below or above the ground, to which the animals can be guided.

The causes of the beaver’s return – which can be observed all over Europe – are diverse, but better legal protection is certainly one of them. As a result, the populations have gradually been able to recover. “Even in highly urbanised areas such as the Belgian capital,” Brussels Environment writes in a report on the state of mammals in the Brussels Region.

“It is often mistakenly thought that large wild mammals mainly need lots of pristine wilderness to maintain a stable population. While these are also important as roosting areas, large wild mammals in many cases can also adapt to a more human-dominated landscape. The question is not so much whether mammals can return, but whether they can return.”

Public support is essential in this regard, and this applies all the more for species that can cause conflicts with human activities. Merckx: “For society as a whole, the return of the beaver is certainly a positive development. But for the farmer who sees his field or garden flood more quickly, it is less good news. The beaver certainly has a positive effect on the net. , but we as a society have to want it too.”